The New Year’s rolling in, and with it, our predictions for the biggest baby names of 2014! Look out for these trendy names – you’ll be seeing them everywhere pretty soon. 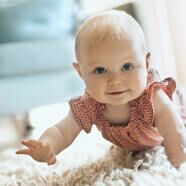 Spice-inspired names
Names like Poppy, Sage, Rosemary and Bay are going to be all the rage in the coming year. They’re unique and lean gender-neutral, so we’ll most likely see parents picking these for both boys and girls – and they’re fairly easy to pronounce — if you stick to traditional spellings! At first, we weren’t totally sure we were into the trend, but our stance shifted when we thought of how cute a baby Cassia or Lavender would be.

Greek names
Not well versed in Greek mythology? Now’s a good time to start! Kourtney Kardashian and Scott Disick were the first celeb parents to take the dive into Greek territory when they named their daughter Penelope, but ever since, names inspired by Greek gods and goddesses have been catching on. You can expect to run into more Theodoras, Calliope, Evangeline, Cyrus soon.

Boys’ names for girls’ middle names
Giving your daughter a boyish name has been a trend for a few years, but we’re thinking that it’ll be even more popular in 2014. New celebrity mama Jennifer Love Hewitt recently named her baby girl Autumn James and it’s even popular amongst readers too. Emma B.* told us that she named her daughter “Sarah Cooper” and Heather C. said she named her baby girl Hannah Ryan.

Hispanic names
This year, Hilaria Baldwin and her husband, Alec, welcomed their daughter Carmen Gabriela to the world – and a few months prior, Ali Landry gave birth to her third child, baby boy Valentin Francesco. Halle Berry reportedly named her son Maceo, and Penelope Cruz settled on Luna for her daughter. Some other names we love? Alessandra, Sofia, Isabella, Estaban, Santiago and Matias.

Family names
If you’d never thought you’d consider using your great aunt Mabel’s name for your daughter, you might be rethinking your decision. In 2014, old-school family and generational names are going to be super-popular for parents. Names like Ethel, Henry, Max, Lawrence, Richard, Gertrude and Edna are making a comeback, which means trendy names like Camden, Cayden, Aiden and Adelynn will be on their way out.

Show biz-inspired names
TV, movies, Broadway plays and even books are great places to find inspiration when you’re searching for a creative moniker for baby. A few of our favorites? Marilyn (after Miss Monroe, of course!), Juliet (what screams playwright louder than Romeo & Juliet?), Atticus (Scout’s father from the classic To Kill a Mockingbird) and Carson (inspired by late-night host Johnny Carson). Trendy names from shows we love now — like_ Olivia _from Scandal and Walt from Breaking Bad — are also gaining popularity.

Plus, More from The Bump