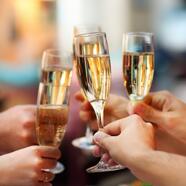 Point & Counterpoint: Drinking Alcohol During Pregnancy – Is a Little Okay?

Swearing off alcohol during pregnancy: The only responsible thing to do, or a clear overreaction?

Not Even A Drop

"No amount of alcohol at any point during pregnancy is safe. Once you find out you’re pregnant, you should stop drinking immediately. If you find you’re pregnant and have already had a couple of drinks, stop now.“

It’s the first eight weeks after conception that the embryo is the most vulnerable to physical birth defects caused by alcohol, and a lot of times that’s when a mom may be having a binge episode of four or five drinks at a time. Research has shown that having four or five drinks during one sitting at three to four weeks post-conception is enough to cause full blown fetal alcohol syndrome. (Research on this topic dates a fetus based on weeks past conception. An OB would call this week six or seven of pregnancy because they date based on the last menstrual period.)

I’ve heard people say, ‘I’m in the third trimester; now I’m going to have a few drinks.’ But there can absolutely be damage to the baby in the third trimester. A baby’s brain is very susceptible to alcohol at all points in the pregnancy. In the last trimester the areas that help with the vestibular system and other sensitive parts of the brain are developing, and can definitely be affected. Alcohol is fat soluble, so it can permeate the brain and damage it at any point during development.

Unfortunately, women will often go to parties and drink before finding out they’re pregnant. If you’re planning a pregnancy, you can simply avoid drinking while you’re trying to conceive. But a lot of women aren’t planning the baby, so they don’t know they’re pregnant in those early stages. They’ve just barely missed a period, or if they aren’t regular, they wouldn’t even know they’ve missed it. This is the dilemma of our society — we have this freely available and non-regulated drug that causes serious problems for babies out there on the shelves. Women can use it and unintentionally cause their babies difficulties. So, if you’re having unprotected sex, you shouldn’t be drinking.

I’d like alcohol labels to say, ‘Sexually active consumers of childbearing age should use contraception to prevent unintentional birth defects in children.’ It is my dream for all babies to be born alcohol-free."

Dr. Susan D. Rich, MD, MPH is on the board of the National Organization on Fetal Alcohol Syndrome, and is a child, adolescent and adult psychiatrist.

Sure, Take A Sip

"Part of this is a lack of data. We know women who have as little as two drinks a day on a regular basis can have babies with fetal alcohol syndrome. But the problem is there’s no data that says even one drink a day does this. Is it possible? Sure. But we just don’t know.

The March of Dimes says pregnant women should not have any alcohol, and I understand why they’re hesitant to say on a large-scale basis that it’s okay to have an occasional drink. They’re concerned that if you give women an inch, they’ll take a mile and decide that if one drink is okay, five or six is fine too. They’re also concerned that there’s no data that outright says you can have one glass a day throughout your pregnancy and have a healthy baby.

I’m not saying six glasses of wine in one sitting is okay — a high level on even one occasion could be very dangerous. But as long as you keep it sporadic — once or twice a week, say, — you’re probably okay. I trust my patients, and I let them know that an occasional glass of wine doesn’t mean one every day. Absolutely not. But some of my colleagues think I’m awful for even saying that a little is fine — they’re concerned that pregnant women will go crazy.

From a rational point of view, an occasional glass of alcohol is fine. If you’re at your sister’s wedding and it comes time to toast with a glass of champagne, it’s perfectly okay. People can get carried away and think crazy things, like it’s not even okay to have a glass of wine touch their lips. If it’s your anniversary and you want to have a glass of wine at your last quiet dinner before the baby comes, go ahead. The European countries — France, Italy, Germany — have produced pretty good thought leaders over the year. Albert Einstein was a German fellow, and it’s hard to imagine his mom didn’t have a drink while she was pregnant with him.

But the way I see it, there’s just no data to say it’s not okay. As long as you take the advice seriously and keep it to an occasional drink, it really is okay."

Dr. Mary Jane Minkin, MD is a clinical professor of obstetrics and gynecology at the Yale University School of Medicine

Can Pregnant Women Give Blood?

Is It Safe to Use a Heating Pad During Pregnancy?

Q&A: Is BPA Safe During Pregnancy?