Find out why one mom considers this swing to be the single most important baby product purchase she’s made. 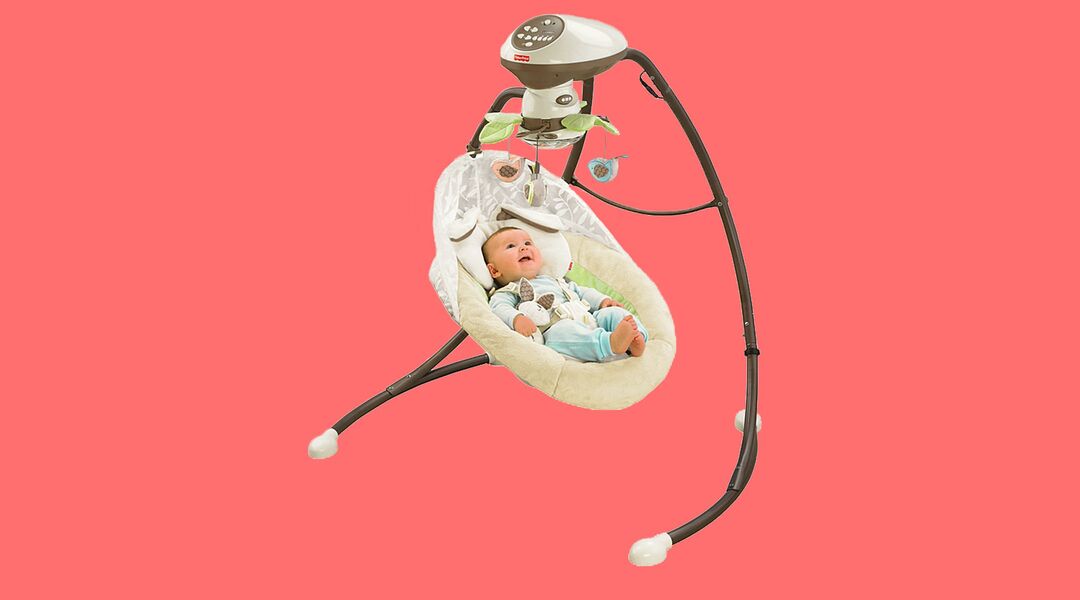 Bottom Line
While it may not be ideal for small spaces, this feature-filled smart swing is versatile, easy to use and offers plenty of options to soothe and satisfy baby.

Ready to register? Shop our catalog for the Fisher-Price My Little Snugabunny Cradle ‘N Swing with SmartSwing Technology. 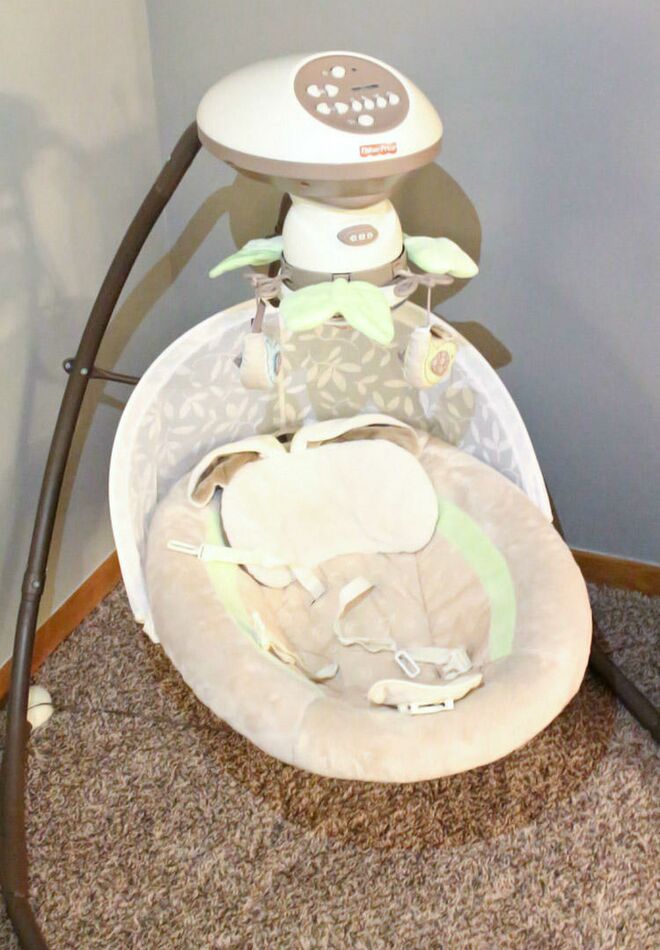 A baby swing is often something first-time parents don’t see as a necessity. It’s bulky, somewhat expensive and, many wonder, “What if my baby doesn’t like it?” I can assure you that this Fisher-Price swing was one of the single most important baby product purchases we made when our second child was born.

With baby no. 1, we borrowed a similar but older Fisher-Price swing from a friend, and our son loved it. But I never fully appreciated the capabilities of a baby swing until our daughter was born. For the first eight weeks of her life, she didn’t sleep unless she was being held. This is exhausting for anyone, let alone a couple of sleep-deprived parents who are also trying to keep up with a very active 2-year-old! Several weeks into holding baby around the clock, we decided we’d try swaddling her and placing her in the swing on one of the highest speed settings. (Ed Note: According to the manufacturer, this swing isn’t meant to replace a crib or bassinet and shouldn’t be used for long periods of sleep.) It only took a few minutes before she stopped crying and quickly fell asleep. She napped for a whole two hours and didn’t move a muscle. For that matter, neither did I—it was the first rest my arms had had in weeks!

While it’s super simple to set up and use, this swing has a lot of options that can be adjusted to suit your particular needs. It has six speed settings, although we really don’t notice a lot of difference in speed between the various settings. The slowest speed did seem a little fast to us at first, but our baby preferred to swing a little faster, so that didn’t end up being an issue. (Ed Note: Thanks to the SmartSwing technology, the swing actually senses baby’s weight and adjusts the speed accordingly to keep a steady rhythm—meaning the swing doesn’t slow down as baby gets bigger and heavier. No pushing required!) The seat also rotates to three different positions: It can face forward (swinging side to side) or to the left or right (swinging front to back). Additionally, the seat has two different recline positions that are easily adjusted using the button underneath the seat. Our daughter liked lying flatter on her back when she was smaller, but as she gets bigger, she likes to be propped up a bit more so she can look around. 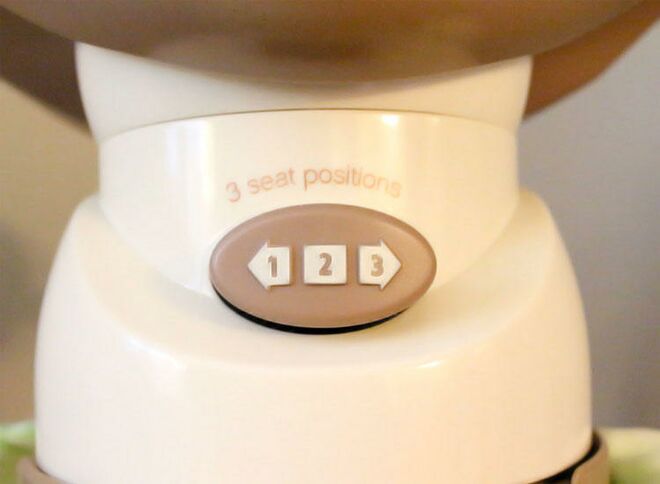 In addition to the different positions for the seat, this swing also offers a few bonus features that my daughter absolutely loves. The mobile that hangs above the seat includes three birds and a mirror. With the push of a button, the birds rotate around the mirror and move up and down. I’m not sure what it is about those birds, but I think that was the first thing my daughter really focused on. Now that she’s a little older, she’ll sit and watch them spin around, cooing and talking to them. It’s actually pretty adorable. There are also several different sound features (nature sounds, birds chirping, lullabies), but we rarely use this feature.

This swing can be used with a newborn baby all the way up to 25 pounds. My daughter was 7 pounds at birth, and the swing has accommodated her size very well ever since we brought her home from the hospital. Assembly was super quick and easy—but due to the size and bulkiness, it’s a little difficult to move from room to room. Also, the motor for the swing does seem to be a bit loud at times, but some noise is to be expected and it isn’t an issue for us.

The swing has a five-point strap system, but the buckle doesn’t require you to use the shoulder straps. All of the pieces of the seat cover and straps are removable and can be machine washed and dried, so the ill-timed diaper blow-out or spit-up are a little less daunting to clean up. 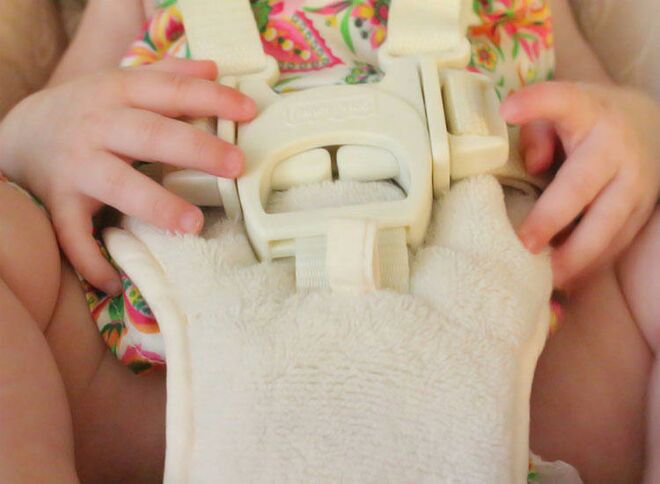 It also includes a plug-in wall adapter, which can save you a small fortune on batteries (it takes four D batteries). One downside, however, is that the actual footprint of the swing is quite large. The frame does collapse for storage, but it still takes up a lot of space and is a little difficult to store. While you need a sizeable bit of space for this swing, it also gives you a little peace of mind knowing the swing is stable and won’t tip over during use.

The Snugabunny swing is a great pick for any parent trying to decide whether or not to buy a swing for baby. As far as swings go, it’s a solid choice and offers everything you’d want in a swing, and probably a little more. It may not be a necessity for all new babies, but for some (and their parents), it’s a lifesaver!