Baby can sleep as close to you as you want (while staying safe) in this ingenious rotating bassinet. 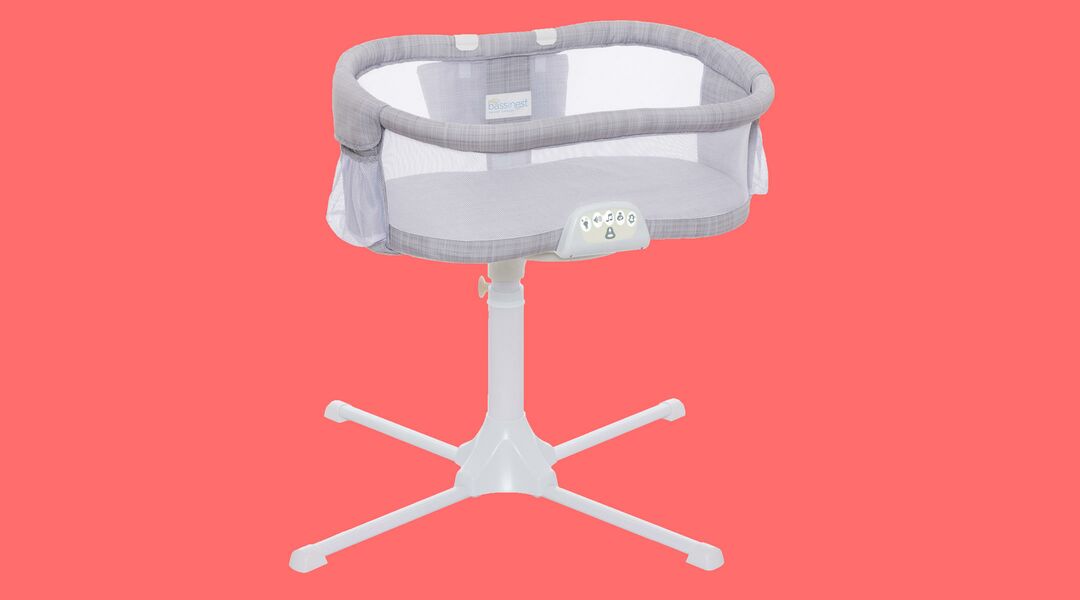 Bottomline
The Halo Bassinest Swivel Sleeper is the closest you can come to co-sleeping with baby and a great, safe alternative to the typical stationary co-sleepers that don’t offer a range of helpful features.

Ready to register? Shop our catalog for the Halo Bassinest Swivel Sleeper.

Finding a safe and comforting place for a newborn to sleep is top of mind for new parents. My first baby had a serious case of reflux and often needed to be held in order to sleep, so for baby no. 2, I wanted to find something that I felt confident would give him (and us) the best chance at some rest. Even though we already had a lot of sleep gear from our first go-around (par for the course with new parents), the Halo Bassinest’s features convinced us to give this a try.

While many other co-sleepers rely on your bed as an anchor and involve intimidating installation straps (that despite what they look like, are not for strapping your baby into the sleeper), the Bassinest just stands right up against the side of the bed. A retractable sidewall lowers so you can easily take baby in and out without getting up—a feature especially accommodating for women who’ve had c-sections. But when you do need to get out of bed, the Bassinest can swivel a full 360° out of your way so you don’t need to scooch awkwardly down to the end of the mattress. 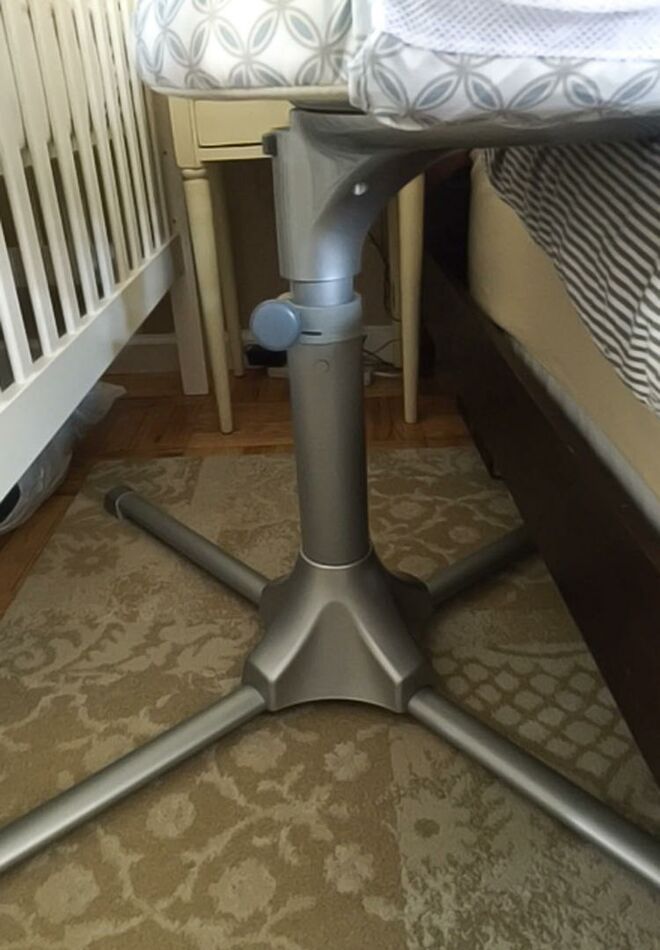 With a single stem and four-legged base, the Bassinest feels very stable. There are no wheels though, so if you need to move it to another spot you’ll need to pick it up, and it’s pretty heavy (it weighs 30 pounds fully assembled). Once you slide the base under your bed as far as it will go, all you need to do is adjust the Bassinest to fit your mattress height (it fits beds 22 to 34 inches), which is easy to do. Twist the adjustment knob located about halfway up from the bottom of the base until it’s loose enough to raise or lower the Bassinest into position and then fully twist the knob back again to tighten the base into place.

Assembly, however, is not so simple. I didn’t marry a handyman, so I do most of the assembly in our house. I should have put it together prior to having the baby, but he was two weeks early and we have a toddler, so “planning ahead” didn’t really happen. Why not save assembly for when I’m sleep deprived and leaking breast milk, right!? At first glance, the directions appear to be very simple. Turns out, they’re actually too simple. I needed more guidance, so I found this really helpful YouTube video of the assembly process.

Since the base is heavy, there were some movements that were hard to do by myself, so I’d recommend having a second pair of hands around as you put it together.

I have the Premiere Series, which comes with some additional features, like two storage pockets for things you might otherwise lose track of: pacifiers, burp cloths and so on. It also features a built-in soothing center, including a nightlight, three lullabies, three nature and womb sounds, two levels of vibration and a nursing timer with an automatic shutoff. (FYI: The original Essentia Series does not include this soothing center.)

The Bassinest was incredibly easy to use and I was happy to have it. The swivel feature makes it so much simpler when getting in and out of bed, and allowed me to easily bring baby closer to me or move him further away (he tends to grunt loudly in his sleep). The crib can rest directly over your mattress so it really feels like you are co-sleeping, yet it gives you peace of mind that baby is in his own safe space. [Ed Note: To reduce the risk of all sleep-related deaths including SIDS, the American Academy of Pediatrics recommends against co-sleeping and encourages room-sharing without bed-sharing.] 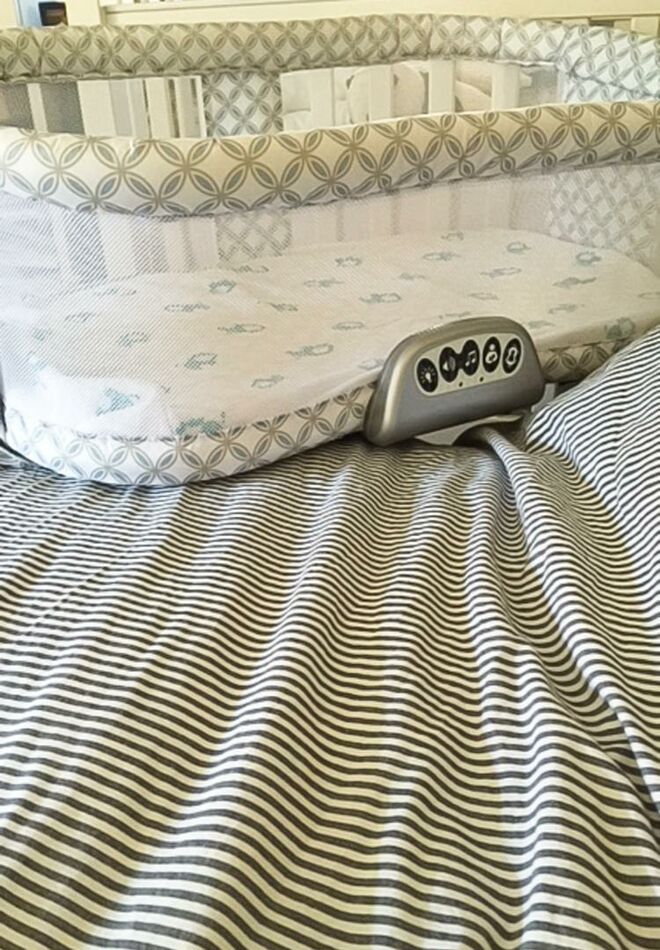 The nightlight and vibration proved to be really helpful, but the lullabies were so low in volume that I couldn’t hear them (although that might have been because our blasting AC drowned out the sound), and there are only two volume settings so you don’t have a lot of room to adjust.

After I figured it out, the retractable side was also handy. Full disclosure: I forgot that it was a feature until a few days after I started using it and then couldn’t get it to work. (Another reason a sleep-deprived mom should not be solely responsible for assembly.) Once I realized the wall wasn’t lowering because it was locked in place (a great safety feature when you have a toddler that wants to “help” all the time and finds her way over to baby quite often), using it was not only a lifesaver but really easy—all you need to do is apply gentle pressure on the top of the front railing with your forearms as you lift baby out. The retractable wall automatically pops back up to its original position when you remove the pressure. 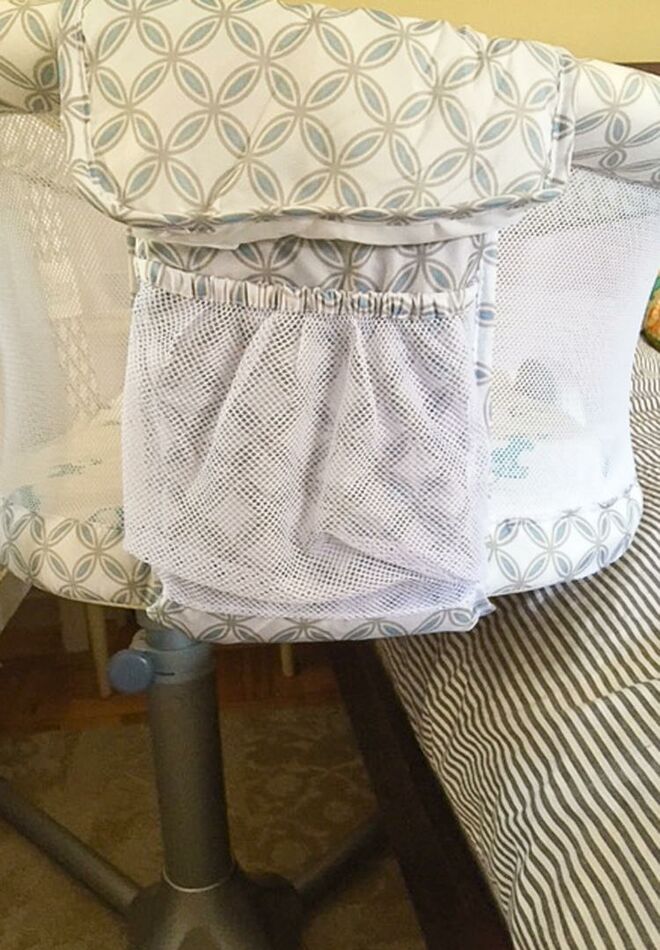 This is definitely one of the more pleasant looking sleepers. It has a sleek silhouette and the Premiere Series is available in two neutral prints—Harmony Circles and Classic Damask—while the newer Luxe Series ($280) comes in Lemon Drop and the Luxe Plus Series ($300) comes in Gray Melange.

At 33.5 inches by 22 inches, it doesn’t take up much space, so it doesn’t feel like your room is being overrun with baby items. The mesh sides allow you to always have a view of baby, and are safe and breathable in the event that baby’s face ends up pressed against them. This added layer of reassurance helped me feel comfortable checking on my son less frequently.

The Bassinest’s mattress is incredibly thin and comes covered in what any adult would assume is a really uncomfortable plastic fitted sheet. Against my better judgment, I ended up wrapping it in a thin swaddle blanket which I had my nanny sew into place so I could make sure it was secure. Still, Halo’s directions indicate parents should leave the mattress as it is. Watch it in action: 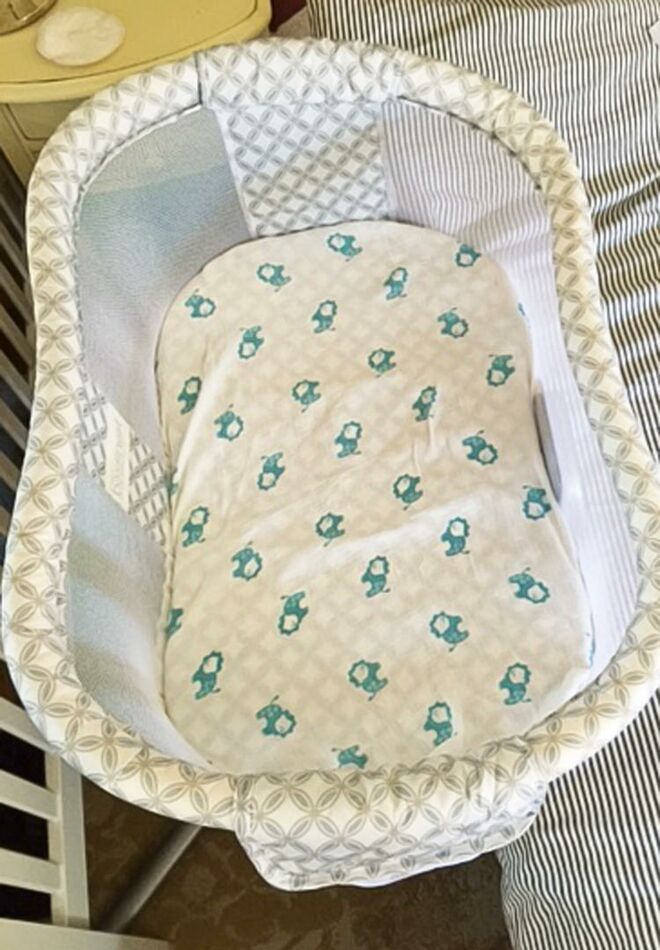 Second-time parents typically feel more confident in their choices, and that was definitely the case when we selected this sleeper. The swivel feature is nothing short of genius and that alone makes it a worthwhile purchase. We’re looking forward to passing it on to friends once our little guy grows out of it (it’s intended for babies up to 5 months or 30 pounds, and should be discontinued when baby starts to show signs of pushing up or rolling over). But until then, we’re happy to count on it for safe sleep for all of us!

Bena Ortiz lives in Brooklyn, NY with her two children, dog and husband and she works full-time as a school social worker in a public school in the Bronx.