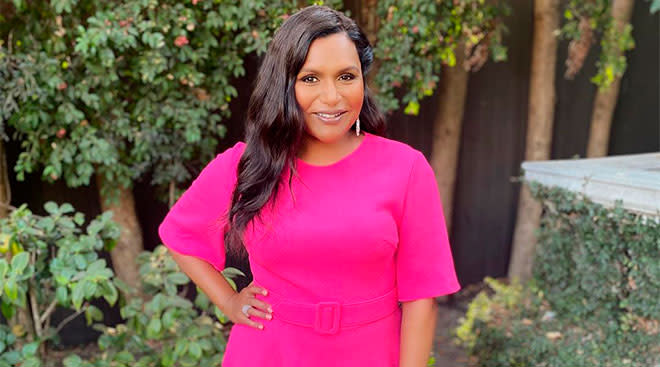 The star revealed the news on Thursday, October 8, while appearing on A Late Show with Stephen Colbert, saying she had welcomed a baby boy, named Spencer, last month.

“No one even knew you were pregnant!” Colbert replied.

Kaling’s first child, 2-year-old daughter, Katherine, who was born in December 2017, also came as a surprise to her fans.

“I always knew I wanted to be a mom, but I would have put it off and put it off. I’m happy that it happened when it did,” Kaling told Glamour in June 2019. “I would have put it off indefinitely. I’ve seen firsthand the heartbreak of women who have waited to get pregnant [and then it doesn’t happen]. For me, my relationship with my mother was such an integral part of my life. Thinking back on our relationship is still such a huge source of my happiness day-to-day, so I’m so grateful for having Katherine.”

Kaling lost her mother to pancreatic cancer in 2012, but Kaling continues to look to her for inspiration as a parent. “My mom was incredibly fierce and so devoted to us, just loved us and really wanted us to be happy no matter what we did. My career choice was not something that she was familiar with and she was just so supportive of that. And if I could give that to my child, just the open-mindedness, I’d be so happy,” People reports Kaling said in August 2017.

While her life as mom certainly isn’t what she thought it would be this year, Kaling said she’s grateful to have the extra time with family. “A lot of the stuff I thought was going to drive me crazy about being cooped up with a 2-year-old for seven months has actually bonded us really close together," she told People.

Congrats to the mom of now two!