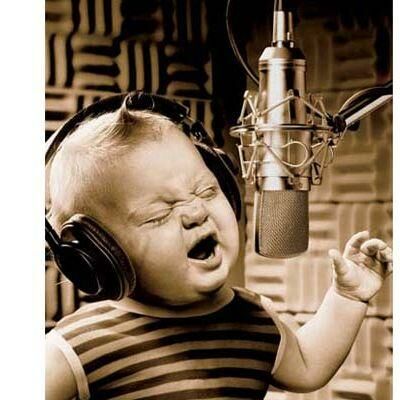 Right now, you want to wear earplugs when your baby screams. But in a few years (and with a few vocal lessons), you may be plugging in headphones to listen to their hits. Here are some singer-inspired names to get them on that track.

Who wouldn’t want their son to emulate Ol’ Blue Eyes (minus connections to the mob)? The Jersey born signer won ladies over by telling them that no man is good enough for them.  Except, of course, for him.

Aretha Give your daughter some R-E-S-P-E-C-T right when she’s born. The Queen of Soul is a great namesake, not only for her strong voice but the strong message she sends to women through her songs.

Not the most conventional name, but that’s’ to be expected from legends. If your son inherits that baritone voice and passion for Christmas carols, it’s sure to be a happy holiday at your home.

Patti LaBelle’s songs may not be baby (or even child) appropriate, but that doesn’t mean you should deprive your daughter of similar greatness. Jaws still drop when the disco turned pop artist takes to the mike and belts out the end of “Lady Marmalade.”

A name destined for success. The Big O was the only singer to outsell Frank Sinatra and Dean Martin…combined!  Using his business savvy and smooth voice, he made millions and used it to help disadvantaged youth.

You can’t compete with the First Lady of Song – not even the boys. Lady Ella rose to fame when she took over for Chick Webb’s band after he died.

Elton If you can handle a diva, than try naming your son after this rock legend. Sir Elton’s smooth and light voice makes hearts melt, while his glittery getup makes eyes sore. We recommend you forgoe the second one.

Turn your daughter into a funny girl. In addition to Ms. Barbara’s singing and success, your daughter may also inherit her self-confidence.

No one tickles the ivories quite like Ray Charles (or sings like him). Better enroll your son in piano lessons ASAP!

Who hasn’t belted “I Will Always Love You” into their hairbrush? Unlike you though, your daughter might actually sound good.

What famous singer would you name your child after?