“How many weeks pregnant am I?” It’s one of the first questions you’ll ask as a mom-to-be. Here, experts explain how to tell how far along you are.

“How far along am I?” It’s the first question to pop into your head once you realize, without a doubt, that you’re pregnant. You’d think that baby’s due date would be as easy as checking the calendar and counting ahead, but surprisingly, zeroing in on how many weeks pregnant you are can be tricky. It’s part math and part conjecture, and in fact, only a handful of babies—about 5 percent, according to the American Pregnancy Association—arrive on their predicted date. Read on to find out why, and pick up a few science-backed strategies for how to tell how far along you are and what week of pregnancy you’re currently in.

Why Due Dates Are So Hard To Predict

There are a bunch of reasons as to why it’s so hard to predict when baby will be born. Let’s start with the most basic: Soon-to-be-moms often count nine months ahead, but pregnancy is typically 40 weeks from the first day of your last period, which is, of course, more like 10 months. (This perhaps also explains why so many women say pregnancy feels like more than 9 months—because it is!)

Another concept to understand when figuring out due dates is that there’s no such thing as a firm date for when baby will actually arrive. Even what your doctor tells you is simply an estimate. After all, every pregnancy is different. Some babies, as if eager to greet you, arrive early; others take their time and enter late, on their own terms.

Gauging the size of your bump probably won’t help much either. For instance, when it isn’t your first pregnancy, your bump may show a bit faster than it did the first time around. “The growth in the abdomen is much quicker,” says Jessica Shepherd, MD, an ob-gyn and women’s health expert. Your abdominal and uterine muscles are looser now, since they stretched during your first pregnancy. Plus, your uterus doesn’t return to its original pre-pregnancy size after baby number 1, giving your body a head start. So, you’ll likely “pop” earlier.

Calculating Due Date: How to Tell How Far Along You Are

The answer to the question “how far along am I?” isn’t just to satisfy a mom-to-be’s curiosity. While getting an accurate due date is tough, it’s still crucial for your doctor to provide an educated guess. That’s because it’s still “one of the single most important pieces [of information about] your pregnancy,” says G. Thomas Ruiz, MD, ob-gyn lead at MemorialCare Orange Coast Medical Center in Fountain Valley, California.

A large part of your prenatal care depends on that due date, he explains. Knowing how far along you are can help you and your healthcare team track fetal development, mark pregnancy milestones and make decisions about prenatal testing. Having an idea of how long baby has been developing in your belly gives your doctor insight into, for instance, whether labor should be stopped because it’s premature or whether it should be induced because you’re well past your due date, Ruiz says. With this in mind, here are a few at-home and in-office ways to learn how far along you are and what your official due date is.

To figure out your due date, count 280 days, or 40 weeks, from the first day of your last period (LMP). (Counting not your strong suit? You can also just plug the date into an online due date calculator and it’ll do the work for you.) “The LMP method works best for women who have a consistent period with a regular cycle,” says Delisa Skeete Henry, MD, an ob-gyn with Serene Health OB/GYN & Wellness in Fort Lauderdale, Florida—and by that she means a cycle ranging from 28 to 38 days. (So you may be more regular than you think!) Your estimate can then be refined with what the doctor learns from your pelvic exam. That’s because a typical uterus—one without fibroids or masses—tends to be certain sizes at certain points in pregnancy. The result is accurate plus or minus seven days, Ruiz says.

The first ultrasound—performed within the first trimester—may be the most precise tool for calculating how far along you are, even if you don’t know your LMP. The transvaginal ultrasound, done sometime during weeks nine to 13, measures fetal length from crown to rump to help estimate the fetus’s size and how many weeks pregnant you might be. Its accuracy is plus or minus five days, Ruiz says, and it’s even more accurate when you have a regular menstrual cycle.

The window for conception ranges from a few days before ovulation to a few days after. A typical menstrual cycle of 28 days means you ovulated around day 14. So if you know the exact date of conception, count 266 days (or 38 weeks) to get your due date—but, of course, understand that baby might actually arrive a few days before or after, says Skeete Henry.

Counting from date of conception isn’t always the most precise method for determining how far along you are, since it’s often difficult to know, with absolute certainty, when you actually conceived. We’re not just talking about the day you had sex; sperm can live inside your fallopian tubes for up to five days, so it’s possible to conceive up to five days after intercourse.

If you underwent IVF (in vitro fertilization)], your due date is determined by the day that the embryo was implanted in the uterus, plus or minus five days, Ruiz says. Since the transfer is scheduled for a specific date, this due date calculation is fairly accurate.

Using a pregnancy test with a “weeks” indicator

Pregnancy tests scan your body for hCG (human chorionic gonadotropin), a hormone produced only once an embryo has implanted in your uterus (in other words, when you’re pregnant). Some of the fancier, more expensive home pregnancy tests have a “weeks indicator” that also tells how far along you are. But these tests let you know only that you’re one to two weeks, two to three weeks or three-plus weeks pregnant (talk about vague!). Fortunately, an ultrasound at your doctor’s appointment can help pinpoint a more specific due date.

Tracking Progress: How to Tell How Many Weeks Pregnant Are You

To figure out your pregnancy week, start counting from the first day of your LMP, which would be considered 0 weeks and 0 days, says Joseph Adashek, MD, FACOG, a perinatologist and co-owner of Desert Perinatal Associates in Las Vegas. The day after you bleed, you are 0 weeks and 1 day pregnant. On the day you conceive, you are 2 weeks and 0 days. After 2 weeks and 6 days, you’re considered 3 weeks pregnant, and so on. This is also known as your baby’s gestational age.

Sounds a bit illogical, given that you’re obviously not pregnant until after you’ve ovulated, right? But in the old days, a gestational age was helpful before ultrasounds could offer clues as to exactly how far along you are, Adashek says. These days, gestational age is still used uniformly around the world to determine how many weeks pregnant you are, especially since many places still don’t use ultrasounds routinely. The gestational age is also the age automatically reported by the ultrasound, should your doctor use one.

A less precise way to measure how far along you are is with baby’s fetal age, which is calculated from the date of conception (a date that’s hard to know with absolute certainty). Since conception happens just after you’ve ovulated (day 14 in a regular cycle), fetal age is about two weeks behind gestational age—and is baby’s actual age. “So if someone’s last normal period was four weeks ago, we call them four weeks gestational age when they are really two weeks fetal age,” Adashek explains.

If this is making your head spin, don’t worry—we’ve got your back! To keep track of how many weeks pregnant you are, simply use an online calculator or sign up for an app like The Bump Pregnancy Tracker (on Google Play or the App Store). The added bonus? You can follow baby’s growth and development each week as your pregnancy progresses.

Just don’t expect to take off with your hospital bag when you hit 40 weeks: You might actually deliver one to two weeks before or after your due date. “It’s not an exact science,” says Skeete Henry. Ultimately, she says, “baby will come when baby is ready.”

Delisa Skeete Henry, MD, FACOG, is a board-certified ob-gyn with Serene Health OB/GYN & Wellness in Fort Lauderdale, Florida. She also serves as the chair of the department of obstetrics and gynecology at the Broward Health Medical Center’s Salah Women and Children’s Hospital. She received her medical degree from the University of Miami Miller School of Medicine.

Joseph Adashek, MD, FACOG, is a perinatologist and co-owner of Desert Perinatal Associates in Las Vegas. He serves as the director of the division of maternal-fetal medicine at Summerlin Hospital Medical Center and Southern Hills Hospital in Las Vegas. Adashek is also an associate clinical professor in maternal-fetal medicine at the University of Nevada School of Medicine. He received his medical degree from Penn State College of Medicine.

Why Due Dates Change and What It Means for Your Pregnancy

How Long Is Each Trimester? 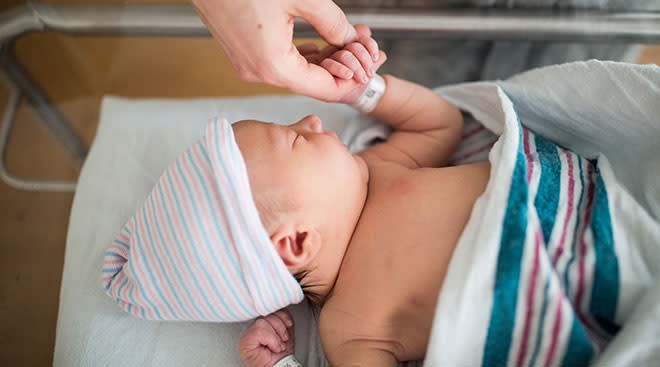 What Happens if You Go Past Your Due Date?
ADVERTISEMENT

Why Every Week Matters in Late Pregnancy
ADVERTISEMENT

Q&A: When's My Due Date?
ADVERTISEMENT