Where Does Your City and State Rank on This Year’s Premature Birth Report Card? 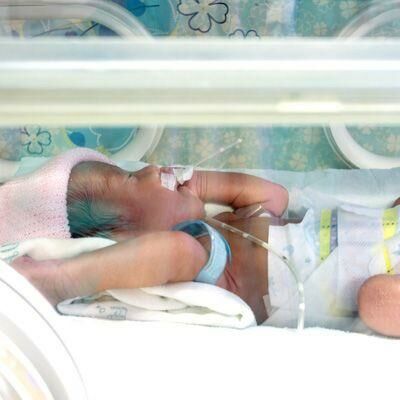 We already know that major social and economic factors like location, education, ethnicity, diet and health care can all play a role in a baby’s  life expectancy and general health outlook, but a new report out today highlights just how much these differences play a role in whether babies are born preterm as well.

Every year the March of Dimes releases its Premature Birth Report Card, which ranks each state individually while giving the country an overall grade. And while the US has successfully managed to lower the rate of preterm births over the past eight years, a new disparity index, created this year, shows that birth rates vary greatly between cities and counties in the same states and between different races and ethnicities within the same metropolitan areas.

Some of the decline is due to a change in how pregnancy length is calculated. Babies born at less than 37 weeks gestation are considered preterm, but recently the CDC’s National Center for Health Statistics started measuring pregnancy length based on an obstetric estimate of gestational age. Doing it this way is considered more accurate than using the date of a mother’s last menstrual period, which is how preterm birth rates were previously calculated. This new measurement method does make the the preterm birth rates slightly lower this year, says March of Dimes Senior Vice President and Chief Medical Officer Edward McCabe, MD. But even accounting for that change, the disparities are still startling.

Based on this year’s birth rates, Idaho, Oregon, Vermont and Washington earned “As,” 19 states received a “B,” 18 states and Washington, DC got a “C,” six others a “D,” and Alabama, Louisiana, Mississippi and Puerto Rico received an “F.”

The March of Dimes also analyzed the  birth rates in the 100 US cities with the greatest number of live births, and found that only one-third of these cities are doing better than the nation’s overall 9.6 percent preterm birth rate (a “C” grade). Portland, Oregon, leads the way at 7.2 percent, but 17 cities received an “F” with 11.5 percent or higher, including Atlanta, Cincinnati, New Orleans, Baltimore, St. Louis, Detroit, Cleveland, and Shreveport, Louisiana, which is the worst at 18.8 percent—that’s on par with countries that have some of the world’s highest preterm birth rates. 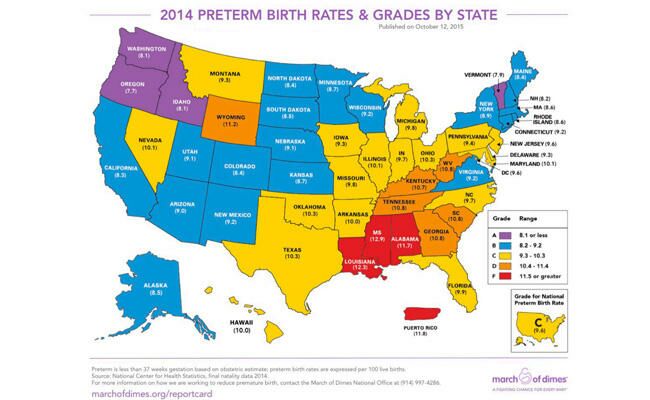 To show how cities and counties are doing compared to other communities within the same state, the March of Dimes also analyzed the rates of racial/ethnic groups in each area to the lowest overall rate.  A low disparity is ideal, because it means that a state or locality has similar rates across different groups (Maine, Utah and Massachusetts hold the top three ranks), while a high disparity means there are areas within the state that are higher burdens and have more room for improvement (Washington D.C. has the largest gaps between racial and ethnic groups and neighboring communities).

Even more eye-opening, the report card shows the US preterm birth rate remains one of the worst among high-resource countries—and 131st overall, according to the most recent data available—coming in way below nearly all of Europe, Australia and North and South America, and more in line with Central Africa and Southeast Asia.

So what’s the solution to getting the US on the same level as other developed countries? According to Dr. McCabe, it begins with expanded access to preconception care and prenatal care for underserved women of childbearing age. “One of the things that we know protects against preterm birth is good health insurance. In the US, Medicaid only covers you from when you are pregnant until 60 days postpartum,” he says, pointing out that while some states have expanded Medicaid, it’s not required and still pales in comparison to the health insurance and benefits provided in  other countries.

Another way we can improve our preterm birth rates is by reducing the number of unplanned pregnancies, which make up nearly half of the births in the US each year. “Plan your pregnancy so that you’re anticipating when you want to be pregnant,” says Dr. McCabe. “Get your body ready to be pregnant by quitting smoking, giving up alcohol, and getting to a healthy weight. Review your medications with your healthcare provider and make sure they are safe to use if you were to become pregnant.” Planning on trying soon? Follow our getting pregnant checklist.