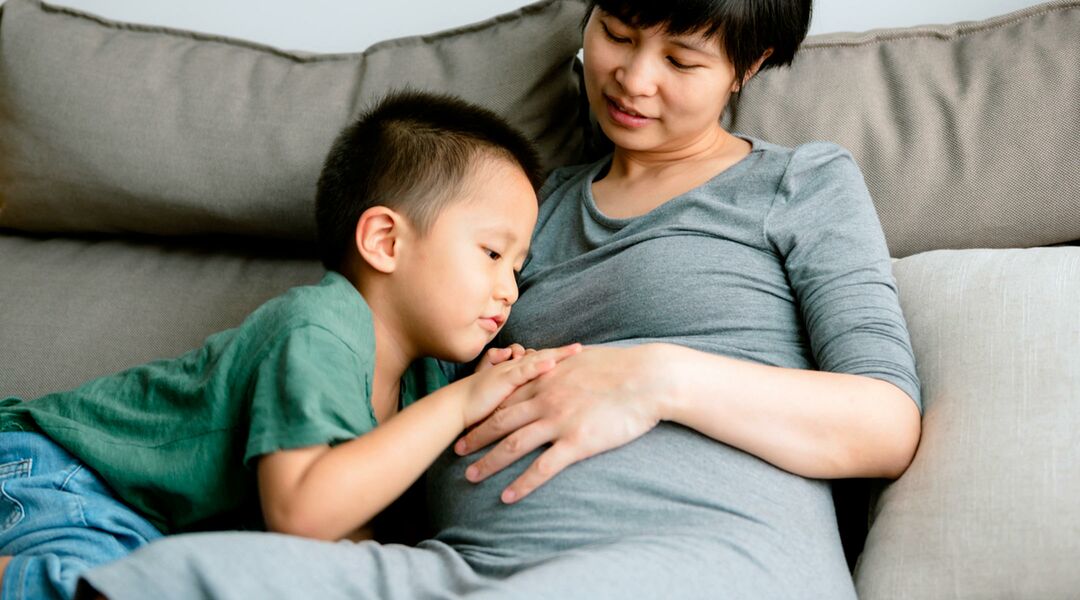 Choosing a VBAC Was the Most Awful, Wonderful Decision I’ve Ever Made

The chance to deliver your second child vaginally after a c-section is something to celebrate, right? Well, of course. Sort of. Maybe. Yes!

Six years into being a parent, I still get mom guilt on a regular basis: When I leave a sick child with my husband to run errands in peace, when I kick the younger kid to a sitter so I can attend a school event for my older one, when I cut their bedtime reading short to hurry downstairs to watch TV alone.

But absolutely nothing compares to the moment three and a half years ago when, during my second pregnancy, my midwife handed me the consent form for having a VBAC, or vaginal birth after cesarean. (My first child was born via emergency c-section.) That form listed 10 or so points that took away some of the OB’s liability, in the event that something goes wrong. Three of them jumped out at me. Or rather, they jumped out, grabbed me by my temples and haunted me every night from then until the day I gave birth to my daughter:

Wait, what? Who would make the decision to have a baby this way? And why were my practitioners advocating so breezily that I not schedule a second c-section and instead experience childbirth naturally—at the expense of my second child’s life?

I genuinely trusted my midwife, who, along with an OB, had so amazingly brought my son into the world three years earlier. My husband watched as my midwife tucked my organs back into place, tugged my uterus together and helped sew the tiny stitches that left barely a scar. She had heart; she cried tears of joy each time she helped a mother bring a baby into the world; she treated me like a sister. She offered holistic advice as well as Western medicine solutions to ailments—before, during and even after pregnancy, which assured me that she was always seeking the best solution for my body.

But it was really hard to swallow this VBAC thing. She talked so casually about it, calling it an underutilized practice and tossing out some statistics about how doctors and hospitals today in the US tend to schedule too many unnecessary c-sections. Nothing she said could erase the GIF in my mind of my uterus erupting. My stomach continued to churn when I talked to the people closest to me and researched the topic on my own.

My husband, who has always been beyond supportive, was cautious about VBAC, but he couldn’t articulate why. “I’m with you whatever you decide,” he said, which didn’t feel like much help. When I discussed the issue separately with my mother and mother-in-law, both said the same thing: “I thought it was once a c-section, always a c-section! Your OB practice sounds a little hippie/dicey… Are they thinking of what’s best for the baby?"

While neither of them based their assumptions on actual facts, statistics suggest that lots of women probably share their first point. C-section rates rose 10 percent in the past 30 years. Today, 1 in 3 births are born via c-section, even though in 2010 a National Institutes of Health statement determined that VBACs are a “reasonable option” for many women. The American College of Obstetricians and Gynecologists issued less restrictive VBAC guidelines that same year, noting that 60 to 80 percent of appropriate candidates who try VBAC will be successful.

As I debated whether bucking the c-section trend was a good or bad idea, I heard from a close friend in New York City—45 miles south of the tiny hospital where I would give birth—who was about to embark on her third c-section. She couldn’t say anything about the medical justification of her procedures; she just assumed because she had a c-section with her firstborn, she had to keep having them. So if VBACs are supposedly so safe and viable, why are c-sections so common in a country teeming with medical technological innovations?

My midwife—as well as the other four practitioners in her office—told me I checked all the boxes required to be a solid VBAC contender: They had performed a low-transverse incision on my uterus during the c-section, which is less likely than a vertical cut to rupture. More than 18 months had passed since that first procedure, which meant my cut had ample time to heal. Lastly, much of what precipitated the need for a cesarean the first time around had more to do with the way my son was positioned and how he wasn’t progressing downward once my water broke than it did about the general status of my uterus and health.

Okay, fine. But didn’t they get that I’m no martyr for natural childbirth? I hate pain. I love the drugs that science has brought to market for people like me, who prefer reaching the end goal via the least effort. The most important thing was to have my baby arrive in the safest, healthiest way possible.

But I also wanted an immediate, tangible connection with this baby. A VBAC was appealing in that it promised a quicker recovery than a c-section. Although a nurse placed my firstborn next to my cheek immediately after my c-section, I was woozy for the next 36 hours—not wholly conscious and continually dry-heaving from the anesthesia hangover. I wanted nothing to do with that baby boy, who roomed in with me the entire hospital stay. And yes, I do wonder what the impact of me thinking I’d rather sleep than snuggle might have had on my son, who, for his whole life since then, has been too enthusiastic to leave me for time spent with other people. (Or maybe he’s just naturally independent?)

I never concretely made up my mind about the VBAC. Ultimately, I tried to trust in my midwife; I signed the consent papers just a week before my due date. I was still worried as I walked into the hospital, hunched over in pain. “I can still ask for a c-section, right?” I said to my husband as we followed a nurse to our room. Before he could answer, the midwife on duty patted my hand and said with a small grin, “Welcome to the VBAC club. It’s sort of exclusive.”

I wanted to tell her that I was more concerned about the excruciating pain, and that I never really wanted to be in this club anyway, but the next wave of contractions quashed my response. Over the next four hours, I continued thinking that a c-section would be a fine way out of this misery—I’d take the involuntary shaking and medically induced loopiness to ease it. That wasn’t going to happen, though; the birth was progressing quickly and well, and when at last I received my epidural, my midwife (the kind one who delivered my first) took my hand and told me to nap.

When I woke 45 minutes later, I felt lucid and the atmosphere was peaceful, unhurried. Gone were all the petrifying factors I felt during my first birth experience—the cold of the steel operating table creeping up my neck, the inability to raise my head and see anything. Gone were any worries that I was in some way harming my daughter as she made her way into the world. My midwife instructed me to push, slowly, when I felt her; and when my midwife finally lifted up my daughter, I got to see her take her first breath, to notice her likeness to a plucked chicken and to have her on my chest as long as I wanted.

To this day, I still feel a little guilty about having wanted to nuzzle my daughter after her birth more than I wanted to do so my son after he was born. But I’ve also come to realize that I had done my best with him as we struggled to cope in those confusing first hours after he was born, just as I tried to do my best with my daughter before she was born. Most of all, I feel incredibly lucky that I got to embrace a prime tenet of motherhood so early on: learning to cherish the very different experiences of two different children.

How to Shop Around for the Best Maternity Hospital

Writing a Birth Plan? There's a Tool for That

5 Things Every Mom-to-Be Must Do Before Baby Arrives

Preregistering With Your Delivery Hospital

How to Write Your Birth Plan

How to Choose Between Natural Birth Vs Epidural

Make a Birth Plan, but Hold on to It Loosely

How to Discuss Choosing Baby’s Guardian With Your Partner

The Truth About Vaginal Seeding