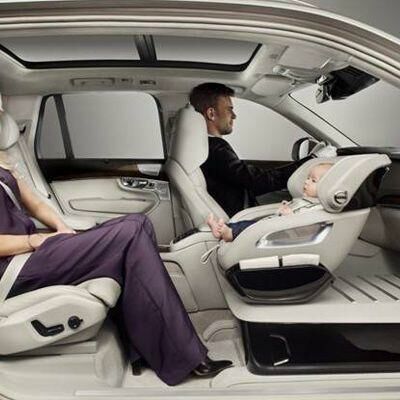 By placing a rear-facing baby car seat in the front of the vehicle, Volvo is introducing a new concept for car seat safety. The reasoning seems intuitive; it will be easier for parents to get baby in and out of the car and to keep an eye on him during the drive. But is it safe?

Parents are used to  guidelines that recommend keeping kids in the back seat until age 12. So this innovation may come as a shock. Volvo sought to alleviate safety concerns on  Facebook: “From a safety perspective there is no difference between the rear seat or front seat, given that the airbag is disconnected. This concept can ensure that the airbag always will be disconnected when the concept is in the car.”

Volvo pairs that safety with convenience. Set on a raised platform that replaces a traditional front seat, the car seat swivels to face out towards the front passenger door, allowing parents to easily get baby in place. It then locks into a rear-facing position.

The seat also has some pretty sweet bonus features, including a storage drawer underneath and a bottle-warming cup holder.

Another bonus: Having baby by your side lessens the risk of inadvertently leaving him in the car, a rare but scary occurrence, especially in the summer months.

Do you want to see a similar concept from other manufacturers?

These 10 Cars Are the Best for Car Seat Installation

This Coat Aims to Solve Your Car Seat Problems

When Can Baby Face Forward in the Car?

What Car Seat Did Will and Kate Use for Royal Baby No. 3?