What Every New Parent Should Know Before Bringing Home Baby

You’re about to have a baby–congrats! But what happens when you finally head home with your newborn? Here, the newborn care basics to read up on before baby’s arrival.
Save article
ByAshlee Neuman
Deputy Editor
UpdatedAug 2019 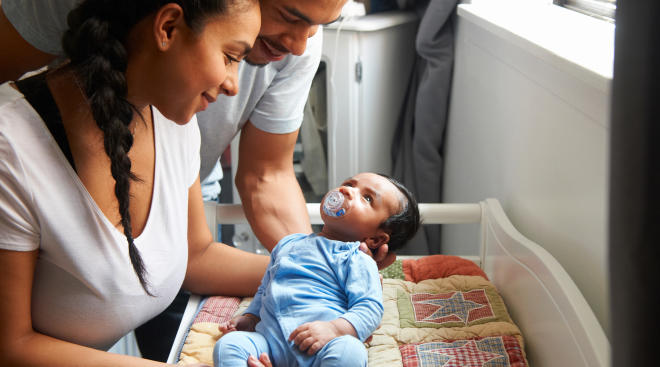 With baby’s arrival now in sight, you’re probably hyper-focused on last-minute nesting needs and prepping for childbirth. But don’t forget to brush up on the basics of how to care for a newborn! From what to do before you even leave the hospital to how much eating, sleeping and diaper-dirtying baby should be doing in those first few days, here’s what you need to know before bringing baby home.

In this article:
Preparing to head home
Knowing the basics
When to call the doctor

The big day is finally here! It’s time to make your way home with your new addition to the family. But before you bundle your little one up and head out the hospital door, there are a few key things to keep in mind.

Picking out baby’s very first outfit is pretty exciting. There are tons of adorable options out there, but when it comes to the basics of a coming home outfit, all you really need is a onesie or footie, a hat and socks if baby’s feet are exposed. “Keep it practical and comfortable,” says Suzanne Clinton, BSN, RN, program outreach manager of women and infant services at Banner Desert Medical Center in Mesa, Arizona. “Parents tend to overdress their baby. Typically the rule of thumb is that babies need one more layer of clothing than we do.” If it’s cold outside, bring a blanket to tuck over your newborn in the car seat—but don’t strap baby in the car seat dressed in a thick winter bunting. Bulky clothing can flatten out in the event of a crash, leaving space under the harness for baby to slip around.

Get ready for baby’s first car ride! Hospitals won’t even let you leave without an approved car seat, so brush up on car seat safety. It should be rear-facing and installed in the back seat, and the straps should be snug with the chest clip level with baby’s armpits.

“I suggest making sure you have the car seat out of the box and properly installed before baby is born,” Clinton adds. “We have so many parents who either didn’t get a car seat or it’s still in the box. Have that all situated beforehand.” Many police and fire stations around the country offer free car seat inspections to make sure you’ve installed the seat properly.

There’s one more thing you should have squared away before you even leave the hospital: Finding a pediatrician for your child. Baby will have their first doctor’s appointment usually within two to three days of birth, so it’s smart to interview candidates and finalize your pick before baby arrives. “Most pediatricians will do a free meet-and-greet,” Clinton says. “Before even having the baby, go to a couple appointments and make sure your personalities and philosophies match and that it’ll be a good fit for your family.”

There’s a lot that goes into caring for a baby, of course, but there are a few basics you’ll need to know before you bring your newborn home. Prepare yourself for baby’s rinse cycle of sleep, eat, poop and repeat! Here’s what you can expect from a newborn, including a few seemingly weird but totally normal things.

You’ve probably steeled yourself for baby’s constant nighttime wakings, but when you first get home from the hospital, you’ll actually have a little sleepyhead on your hands. “Newborns usually sleep a lot in the first few weeks,” says Sara Siddiqui, MD, FAAP, a pediatrician at Hassenfeld Children’s Hospital at NYU Langone in New York City. “They may sleep up to 20 to 22 hours a day.” Make sure you’ve prepared a safe space for your infant to snooze, either in a crib or bassinet that’s free of any toys, blankets, pillows or padded bumpers. All that should be in the bed is a tightly fitted sheet and your child.

One of the biggest new-parents concerns is how much newborns should be eating. “Keep in mind, babies have very small stomachs, so they have to feed frequently,” Clinton says. If you’re breastfeeding, the recommendation is to feed baby on demand–meaning whenever they’re hungry and ask for food. That can be eight to 12 times a day, Siddiqui says. If you’re bottle-feeding baby with expressed breast milk or formula, she adds, the amount can range from 2 to 4 ounces every two to four hours.

Your pediatrician will weigh baby at each well-visit (which for newborns are frequent) to make sure they’re growth is on-track. But don’t freak out if baby drops some weight after birth—it’s actually normal for newborns to lose 5 to 8 percent of their birth weight. Why? Because newborns are typically born with some swelling due to the trauma of birth, Siddiqui explains, so it’s common for them to lose weight in the first week of life as the swelling goes down. Most babies return to their birth weight after a week or two, she says, although it can take up to three weeks for a breastfed baby to gain the weight back. Rest assured, your pediatrician will monitor baby’s weight closely during this time.

Aside from the weigh-ins baby will have at the pediatrician’s office, the best way to tell if your newborn is eating enough is by counting how many wet and dirty diapers they’re producing in a day. In the first week of life, the number of wet diapers they should be having corresponds to how many days old your newborn is, Clinton says—so baby should have one wet diaper on the first day, two on the second day, three on the third day, you get the picture. After day six, you should be looking for six to eight wet diapers within 24 hours. There’s a slightly different count for poopy diapers: You’re ideally looking for at least one stool a day for the first three days, Clinton says, followed by three to four stools a day for breastfed babies. Formula-fed infants can poop less frequently, sometimes not even once a day.

You’ll also start to pay attention to the color and texture of baby’s poop (hello, parenthood). In the first couple of days, their stool will be a black, sticky, tarry substance called meconium, Clinton explains, and while it looks pretty bizarre, it’s completely normal. After that, the stool of breastfed babies will turn to a runnny, seedy, mustard yellow poop, she says, while the stools of formula-fed babies is claylike in texture. Another thing to know: Things can get animated. Don’t be surprised if you hear grunts and cries and see baby turning red—once newborns get used to how their body works, they won’t be quite as loud about it. Remember, this is all new for them too.

Yep, babies cry—a lot. “Newborns are amazing in that they can manage to communicate so effectively using plenty of non-verbal expressions and cues, and crying is one of the most effective ways your baby can communicate,” Siddiqui says. They might be trying to tell you that they’re hungry, tired, too hot or cold, have a wet diaper, are overstimulated or not feeling well. “As you get to know your baby, you’ll begin to understand what each of their expressions mean,” she adds.

While crying is how babies communicate with us, it can still be overwhelming for new parents, especially if you have a newborn who cries a lot. But no matter how frustrated you get, never shake a baby. “Shaking a baby can cause injury to baby’s brain and even lead to death,” Clinton warns. “If you become angry or frustrated, give the baby to someone else, or if you’re home alone, but the baby in a safe place like the crib and step away to compose yourself.”

Caring for the umbilical cord

When you get home from the hospital, baby’s umbilical cord stump is still going to be healing. The best way to care for it is to simply leave it alone. Make sure it stays dry (so give baby sponge baths only until it falls off) and gets plenty of air. To avoid irritating it, fold baby’s diaper down away from the stump. The scab will fall off on its own in about seven to 10 days.

Exposing baby to the outside world

With a tiny newborn now at home, it can be a little nerwracking to venture outside. And for good reason: “Babies’ immune systems aren’t fully developed at birth,” Siddiqui explains. “They’re very susceptible to illness and don’t have the full capacity to fight off germs.” If you want to take a walk outside to an open area such as a park, that’s perfectly fine (and even beneficial, for both you and baby)—but closed spaces, such as the mall or a big box store, may not be a good idea for the first six to eight weeks, Siddiqui says, since it’s easy for germs to spread in that kind of environment. If you need to take public transportation, try to stick to less crowded areas and times.

As for having people meet the baby? Friends and family are naturally going to be super-excited to see your little one, but the fewer visitors the better, Clinton says, especially in the first several weeks. Everyone who does come into contact with baby should wash their hands with soap and warm water before holding your child and should avoid kissing them, especially near the mouth area. Children under the age of 5 shouldn’t be allowed near your newborn (with the exception of siblings, of course). Clinton also recommends checking that visitors are up-to-date on their vaccines, especially Tdap (for whooping cough) and MMR (for measles, mumps and rubella).

It can be a little jarring to see angry red bumps appear on baby’s face, but baby acne is common and usually temporary. “It almost always clears up on its own without any kind of treatment,” Clinton says. Whatever you do, refrain from picking or popping those bumps! Newborn skin is super-sensitive, and if you break the skin, you could be exposing baby to possible infection. Another very common newborn condition? Cradle cap, which looks like rough, scaly patches on baby’s scalp. Don’t worry, it’s not painful or itchy for your little one, Clinton reassures, and it usually clears up on its own in a few weeks or months. If the baby acne or cradle cap isn’t clearing up on its own or seems to be getting worse, give your child’s pediatrician a call.

First-time parents are often taken aback when they gaze into their baby’s eyes…and discover they’re crossed-eyed! Don’t freak—it’s completely normal. Newborns don’t focus well at first, and their distance vision is limited to about 6 to 8 inches, Siddiqui says, which is why their eyes can seem crossed at times. If it happens to persist, doctors will test for lazy eye starting around six months, she adds, and if there are any issues, you’ll be referred to a pediatric ophthalmologist. Until then, sit back, relax and watch your child’s vision strength.

Coming home with a newborn can feel intimidating, and it’s not always clear to first-time parents what’s normal and what’s not. You can always call the pediatrician if you’re unsure about something, but here are the big red flags to keep a lookout for. If baby has any of the following symptoms, call your child’s doctor.

“Know your pediatric practice’s after-hours phone number so you can reach the pediatrician on call to discuss any concerns over the phone,” Siddiqui advises. “We can help you determine what to do next.”

How We Agreed on a Parenting Style Despite Our Different Cultures