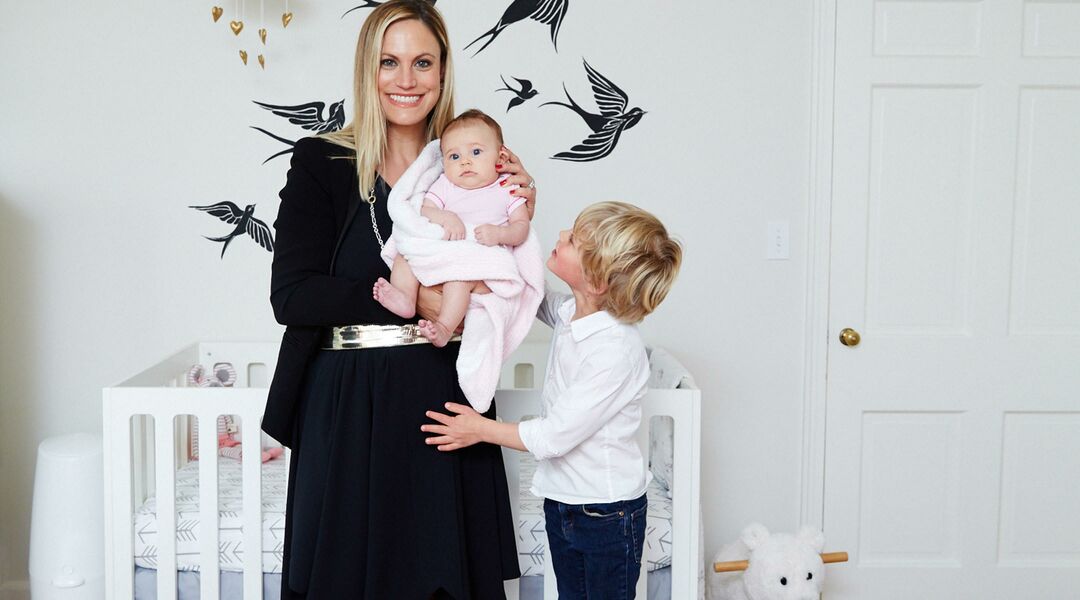 If you’ve ever seen or received a Ceci New York wedding invitation, you know you’re the lucky recipient of a breathtaking work of art. So when it came time to design her almost-4-month-old daughter Elle (“Ellie”) Hazel’s nursery, the award-winning graphic designer brought the same discerning eye, glam touches and personal details that are hallmarks of her luxe stationery. We talked with the creative director to find out her inspo for turning a white box into a trendy yet timeless colorful space she hopes Elle will enjoy for years to come. 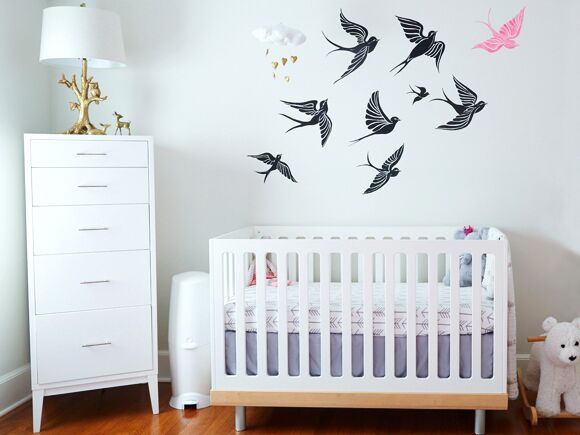 What was your vision for the nursery?
I learned with my son Mason [now 4] that babies don’t remain little for very long. The money and the amount of work you put into designing the nursery kind of gets outdated quickly. So this time, I tried to figure out how I could leverage items I already owned, and bought new ones Elle would be able to grow into. I wanted the room to be fun, youthful and fashion forward—a mix of all the things I love and want to inspire her with. I also knew I didn’t want a typical princessy, fluffy baby room. I started with a clean black-and-white palette then added graphic impacts and pops of color in raspberry, pink, orange and red, along with the hints of brass and gold. When my 14-year-old stepdaughter Caroline first saw the nursery, she said, “I love this room—I want it to be my room!” So the fact that a teenager loves it, I’m like, “Okay, mission accomplished.” 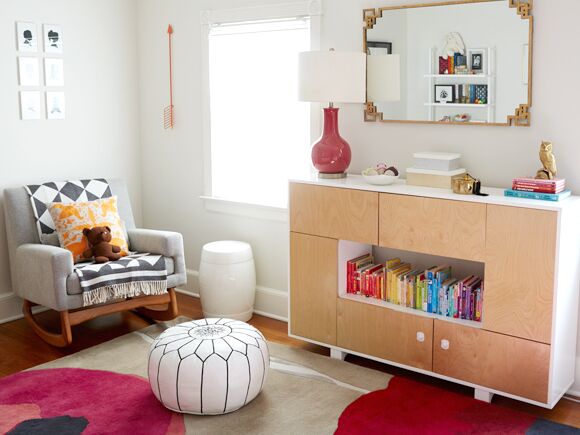 Did you reuse any items from Mason’s room in the nursery?
We brought in the long rectangular bookcase (the one with the mirror above it) and the tall white dresser (both from CB2), which I use to store changing and feeding supplies. I’m all about hiding gear and baby things to keep it as tidy as possible because that stuff can get messy on display! Elle’s also using Mason’s old crib, which converts into a toddler bed.

What was the first item you bought for the room?
I found the rug early on in my pregnancy. I came across it when I was searching for one for my office and thought it would be perfect if I were having a girl. I love it because it has a perfect balance of a beige foundation with poppy flowers that are very girly yet edgy. So when I found out her gender, everything fell into place, and I decided everything else was going to play off of it. 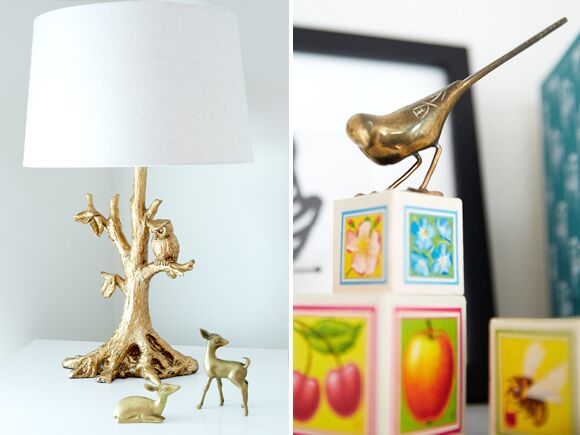 How did you build upon your inspiration?
Since I’m an artist and designer, I wanted to incorporate influences from the worlds of art and fashion as well as family mementos. I thought, “What are the little personal touches I want to put in the room and what are the things I want her to be exposed to?” I think whatever you put in the room, the children are exposed to it, see it, love it and learn about it. With Mason’s room, it was all safari animals, world explorers and baby-Indiana Jones vibes. He now loves animals. I can’t help but wonder if what I put in the room influenced his preferences. So I thought it would be really cool to try the same for her.

Tell us about those birds over the crib.
I drew and painted them. I love making special things for my children. The pink bird symbolizes Elle; she’s the leader of the flock flying to her own happy song. 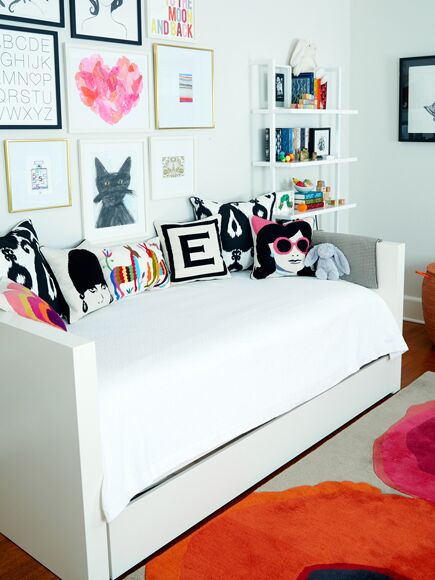 What made you put decide to put a daybed in the nursery—is it also being used as a guest room?
In Mason’s nursery, I had a pullout loveseat couch, but it was too small to comfortably lay on when it wasn’t opened up. When he was crying and I was up all night long and so exhausted, I would want to lay on the couch, but I’d regularly wake up with a sore neck and back. This time around, I thought, “Why am I doing that to myself?” So I wanted to make it more comfortable for me, plus Elle will be able to use this bed for many years to come. It’s also a trundle, so it will come in handy when she’s older and has sleepovers.

Where did you find all those fun pillows?
I first bought the orange Otomi print (on the rocker); I’ve always loved handmade embroidered prints and Mexican culture. Last summer I was in Mexico for a speaking engagement, and I was gifted the second Otomi print (the multicolored one in the middle of the daybed). I liked the bold color those prints added and then wanted to pair them with some graphic black-and-white ones for a sophisticated edge.

Most people thought I was crazy to do black and white for a baby’s room, but I think if you balance it with enough white and pastels and just touches of black and white, it becomes more sophisticated. When I was first teaching Mason that newborn Elle couldn’t see in color yet, he thought it was so appropriate that I had all these black-and-white items in her room. 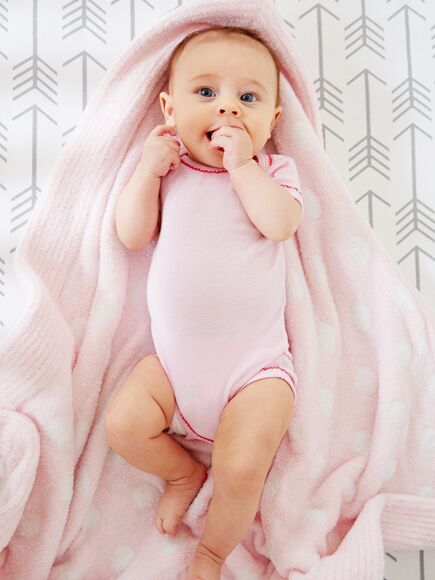 What about the arrow motifs?
I didn’t want the room to be all one theme or print, but a curated collection of graphic moods and vibes. I’m big on symbolism, and everything in my work has to mean something. An arrow can represent courage as one moves forward in life, along with defense and protection from harm (which is similar to a mother’s job, right?). I want her to be successful, and to me, the arrow graphically meant that movement and strength. I first found the large orange arrow that’s hanging above the chair, and wanted to tie it in somewhere else. I like that the crib sheets are graphically intense but in a softer, more babylike feel. 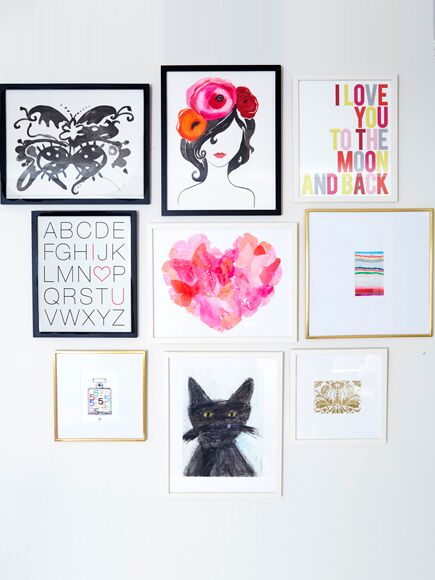 Walk us through some of the pieces on the gallery wall.
They’re all sentimental. Starting with the top left inkblot, I painted the butterfly and hid ladybugs within the design since “ladybug” was one of our nicknames for Elle when I was pregnant. I also painted the top center one, using the flowers from the rug as inspiration to give her some fashion flair.

As a graphic designer, I wanted to the wall to not only be watercolor prints, but also have some typography in there since I love type. I say “I love you to the moon and back” to Mason all the time, so I thought it’d be nice to pick some fun phrases that I’ll be saying to her, and then when she learns to read, she’ll recognize these little touches of love.

I made the postcard-size perfume bottle (bottom left) at the opening for a Chanel art exhibition (it’s a tribute to the bottle design of their classic Chanel No. 5). It’s perfect because she’s our fifth baby (I also have two more stepchildren who are in college), so the design is significant in that way as well. Caroline also made three of these: the heart in the middle, the one with the stripes and the cat. 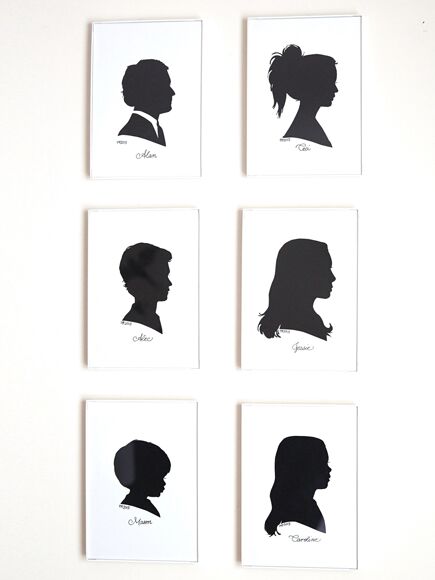 What about the the silhouettes on the other wall?
Artist Patti Rishforth usually makes these on the spot at events, but I sent her family pictures because she’s based in South Carolina, and she transformed them into these hand-cut portraits for me. I’m going to ask her to do one of Elle when she gets a bit bigger so we have one of everyone in the family. My stepchildren don’t live with us, but I want Mason and Elle to have their whole family present. 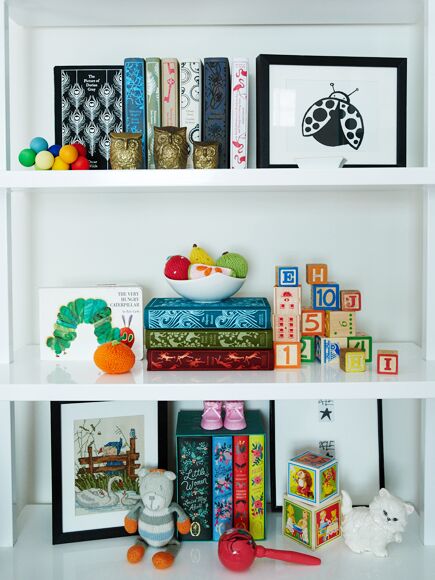 Tell us about the items on the bookshelves.
I found things I’ve collected in my life that I loved. Some of the stuff, like the little porcelain cat or the teddy bear on the chair, is from my room growing up, while others were gifts. When I was young, my grandmother did a cross-stitch of a little girl looking at swans, and the little booties on top of the books were from Elle’s baby shower. These things are sentimental, but can also become decor. Especially on that shelf, it’s a mixture of new and old. While you want to buy new stuff, sometimes you can start with things you already have and build your story around that.

Are there nursery items worth splurging on?
A worthy splurge would be a rug or nice carpet. I find that when you buy the less expensive rugs, they tend to shed and get in baby’s fingers when she’s crawling, walking and playing on the ground. You should also buy neutral on key bigger items like furniture so you can repurpose them if or when you do have more kids. I’m thankful I went with white and neutral woods for Mason’s crib and larger pieces. Now they work for Elle’s room in a completely new and different way! 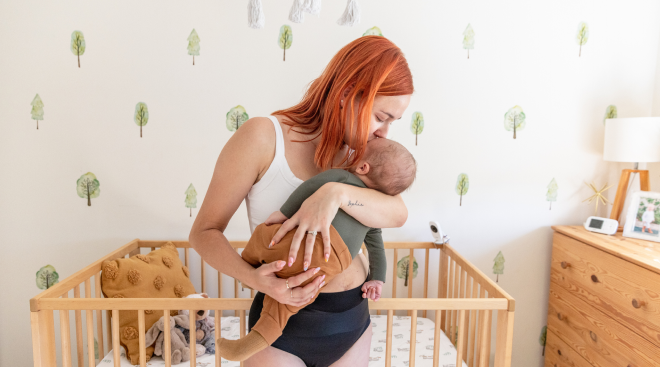 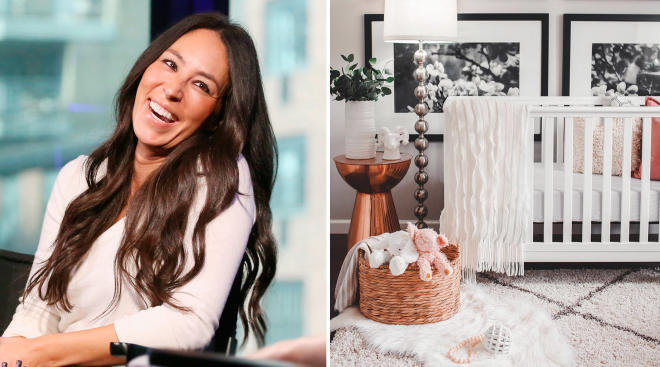 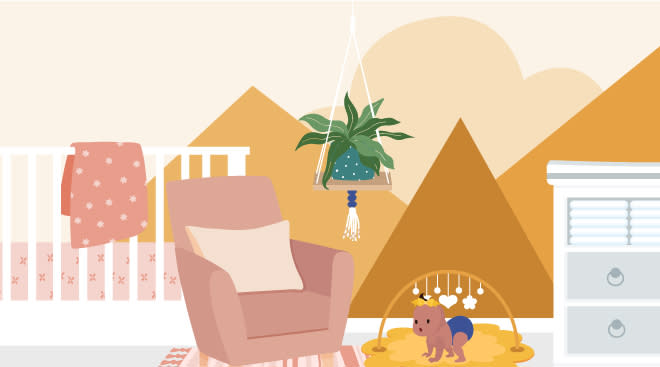 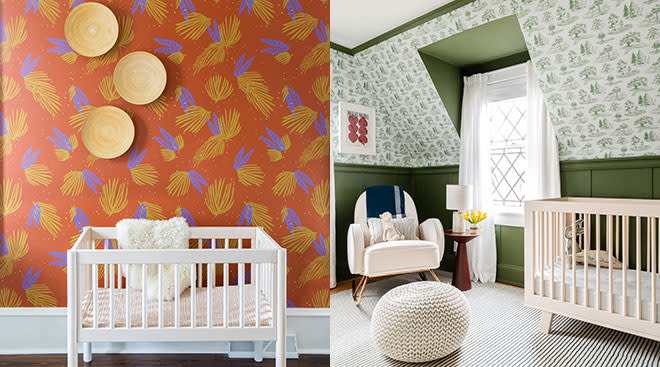 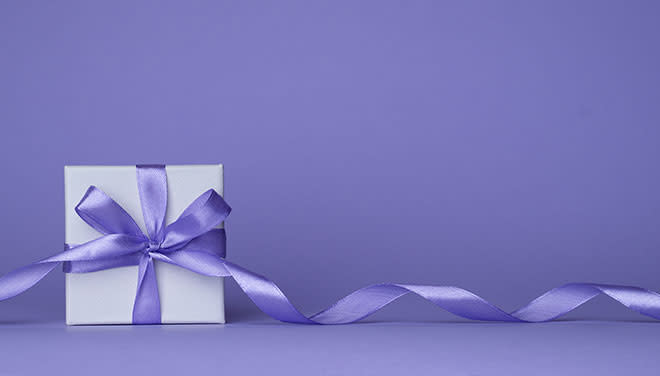 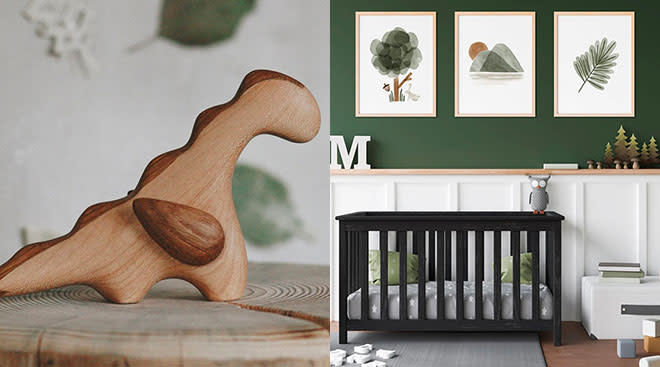 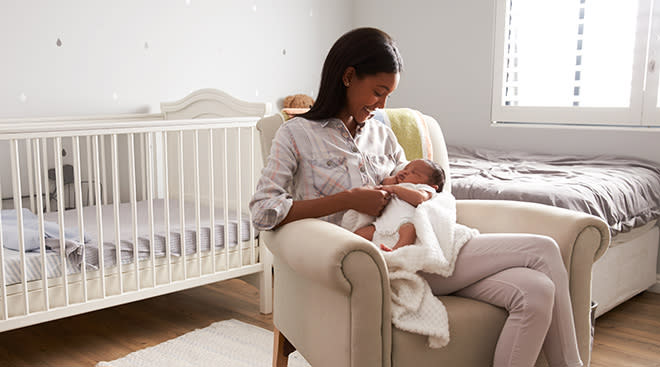 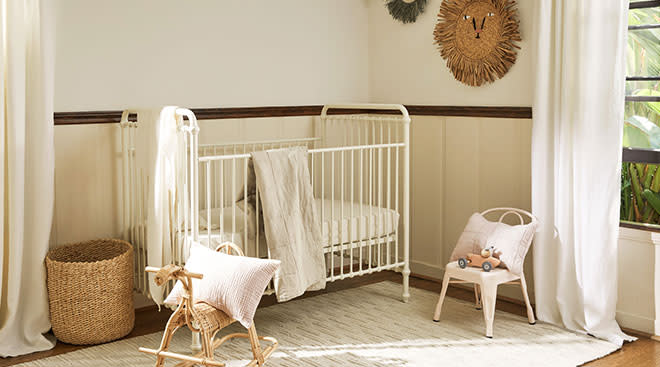 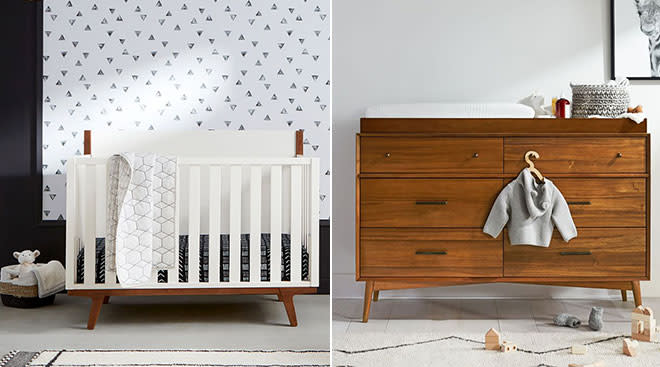 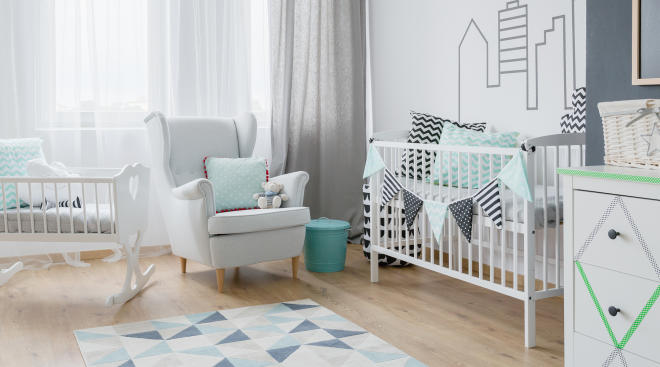 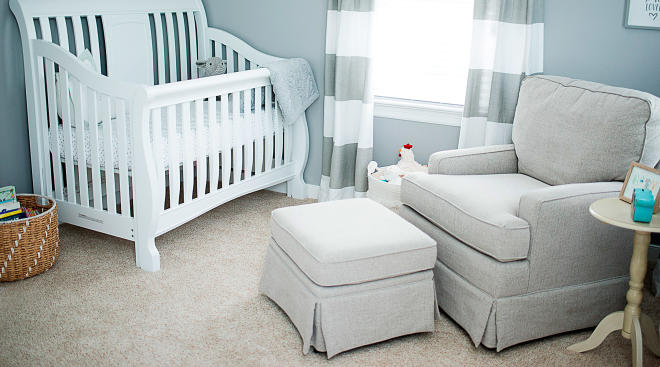 Your Checklist for the Perfect Nursery 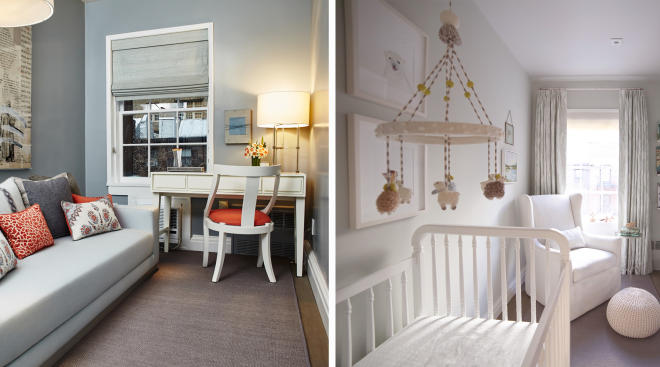 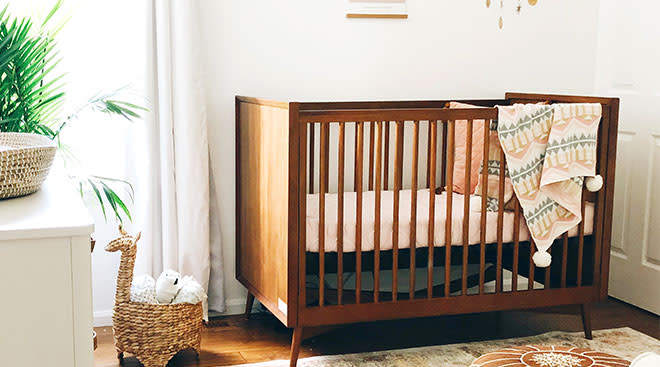 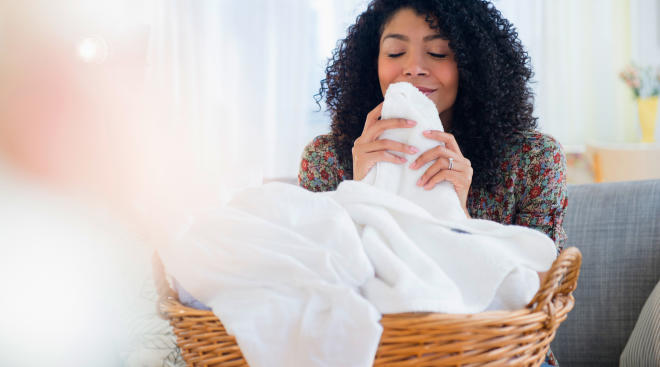