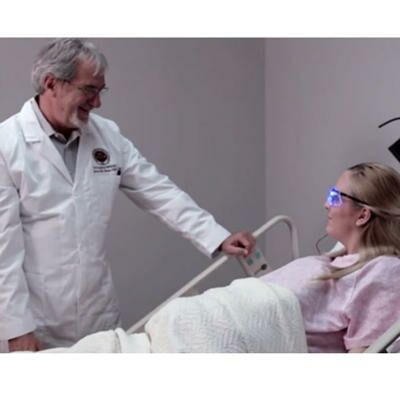 Olcese, an associate professor at Florida State University College of Medicine, realized that many women go into preterm labor at night, when the brain hormone melatonin is at its peak. So after winning a $35,000 award from Tallahassee Memorial Hospital (TMH) in February 2014, he began to  develop goggles that would expose pregnant women to light and reduce their melatonin levels. Now, he’s taken another step forward.

Olcese just signed a licensing agreement with women’s health company KynderMed that will allow him to continue with his goggle prototypes, which already show “tremendous promise,” he said in a statement.

After making the connection between melatonin and nighttime labor, Olcese analyzed pregnant volunteers at TMH in Florida. Exposing the women to bright light for just one hour a night, Olcese found, lowered their melatonin levels, which suppressed contractions and potentially delayed labor. He then began to develop his light-emitting prototypes, which shine a “brief blue light” into the eyes of a sleeping pregnant woman to help lower her melatonin levels.

“I’ve been working with melatonin for a long time now, and I continue to be fascinated by the problems it can solve in the labor process,” Olcese says. With backing by KynderMed, Olcese has also patented a labor-inducing, side effect-free drug that combines melatonin with a low dose of oxytocin. The combination is supposed to induce labor without common oxytocin side effects, such as increased heart rate, decreased blood pressure and hemorrhaging.

With the help of TMH and KynderMed, Olcese will be able to develop his goggle prototype further into a comfortable sleep mask. He believes the process can reduce the large number of infant deaths or birth defects caused by preterm labor each year. And KynderMed is just as excited about the possibilities.

“We believe that Dr. Olcese’s exciting technologies will provide the first real advancement in this area in decades,” says Don Rosenkoetter, president of KynderMed.