10 Things Not to Give Up During Pregnancy

Think you need to give these foods and activities up? Think again.
facebook
twitter
copy link
email
save
ByLinda DiProperzio
Updated April 19, 2019 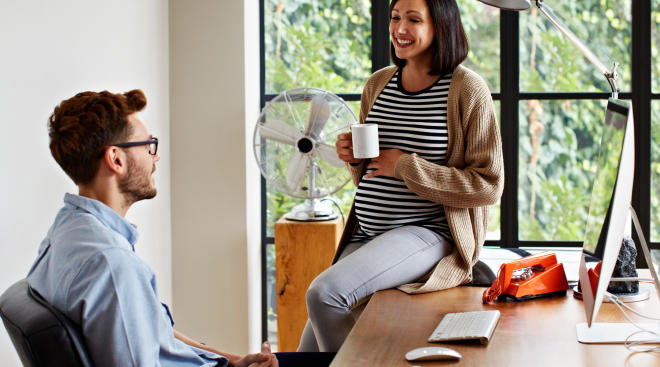 Here are 10 things you might think you need to give up while expecting — but they’re perfectly safe for you to enjoy. (Of course, every pregnancy is a little different, so it’s best to talk to your doctor if something’s worrying you.)

You spent all that time getting busy while trying to conceive. But many moms-to-be think once they’ve succeeded, their sex lives need to take a backseat until after baby arrives. Not true! Sex will not cause a miscarriage or harm the baby in any way, says Mark Bland, MD, Novant Health obstetrician and gynecologist. In fact, early miscarriages are usually related to chromosomal abnormalities. Plus, the baby is protected by  amniotic fluid and the strong muscles of the uterus, so it doesn’t feel anything when you and your partner are getting romantic. (Though baby may get a bit of an endorphin rush from the hormone boost!)

Once you pass your first trimester—when morning sickness, sore breasts and fatigue might make sex sound, well, less than sexy—you’ll probably find you’re in the mood a lot. Take advantage of it, says Terreece Clarke, veteran mom from Columbus, OH. “If there’s ever a time you don’t give up sex, it’s when you’re pregnant. Once the baby arrives, it will be a long time before you can get any nookie—or want it for that matter,” says Clarke, a mom to three. “Women should take advantage of the heightened sensitivity that often occurs in the pubic region during pregnancy and have some of the best orgasms of their life!”

Remember Lea-Ann Ellison, the woman photographed doing Olympic-style barbell lifts at eight months pregnant? When those photos went viral, she caught a lot of heat for “overdoing it” while expecting. But Ellison—who had been lifting for more than two years already—pointed out she was experienced enough to know what her body could handle.

The same holds true for you. “The general rule is that whatever you were doing before you were pregnant—running, swimming, lifting weights—is fine,” says Bland. “If you can talk while working out, then you’re exercising at the right pace. And even if a woman never worked out before getting pregnant, she should start some type of routine once she is expecting, even if it’s just walking.”

Kristin Mallon, a mom of three and a board-certified nurse-midwife in Hackensack, NJ, says that working out releases endorphins, increases circulation and aids in beating fatigue. “It’s all essential to ease labor and prevent cesarean section and birth complications,” she adds.

If you can’t start your day without a cup of Joe, you’re not alone. A recent poll found that 78 percent of people would rather give up alcohol, social media or sex with their spouse for a year (yes, an entire year!) rather than forfeit their morning coffee.

Luckily, even moms-to-be can enjoy their Starbucks—as long as it’s in moderation. “I love coffee! Pre-pregnancy, I had about two or three mugs a day,” says Jenni Bingham, a mom of one from San Francisco. “My OB advised that I could still drink coffee and recommended one mug a day. So I did cut down, but didn’t give it up all together. Honestly, during the first 12 weeks, I didn’t even want any because my stomach was uneasy. But after that, I loved brewing my morning Joe!”

You can have that turkey sandwich for lunch, but there’s a catch: The meat needs to be heated to steaming before consumption, says Bland. Why? Precooked cold cuts can carry listeria—bacteria that can make expectant moms ill and have devastating consequences to an unborn child. And pregnant women are about 20 times more likely than other healthy adults to get listeriosis. So be sure to zap any deli meats in the microwave before eating. Hot pastrami, anyone?

Luckily, you don’t need to stay local for your babymoon. As a mom-to-be, you can still fly to your favorite far-off destination, as long as you’re careful to stand up routinely and avoid sitting in one position for too long to keep circulation going at a healthy pace for mom and baby, says Bland.

And it might be best to enjoy a trip (or two!) before the sleepless nights set in. “It won’t get easier to travel once the baby arrives,” says Nicole DeAvilla, a mom of two from San Francisco. “When I was seven months pregnant with our second child, my mother happily volunteered to take our 2-year-old son so that my husband and I could spend some quality time together before the new baby was born. Of course, I checked in with my OB first to make sure the flying and hiking would be okay, and I was given the green light. We really enjoyed the break before the new baby arrived.”

Sleeping on Your Back

Pregnant women are told to sleep on their left sides because it can help improve blood flow to the placenta, while sleeping on your back decreases circulation to baby and causes your uterus to lie on the spine, back muscles, intestines and major blood vessels, making things quite uncomfortable!

But staying in one position all night can be mission impossible, so don’t panic if you wake up on your back. “We move around enough in our sleep for this to be a non-issue,” says Bland. “So even if a woman winds up on her back at some point during the night, she likely won’t stay there for long.”

Some women might skip a soothing bath out of fear that hot water can harm their baby. But if there’s ever a time you need to sit back and relax in some bubbles, it’s during your pregnancy. “This is essential to ease the aches and pains of labor and should not be given up,” says nurse-midwife Mallon. Still, don’t turn that tub into a sauna. “As long as your core body temperature is maintained at 98.6 degrees, baths are fine.”

Hooray! You don’t have to live with dark roots or gray hairs for almost a year! Most OBs recommend waiting until after you’re out of your first trimester before coloring your hair, but after that, it’s generally considered safe to keep your regularly scheduled hair appointments, Bland says. To minimize any potential risks, try not to let the dye touch your skin, choose products with fewer chemicals and make sure the room is well-ventilated. With all those pregnancy hormones doing their thing, you’re likely rocking some super-luscious locks right about now, so why not work it?

We know all about the warnings: Avoid soft cheeses during pregnancy because of the listeriosis risk. But in reality, women can enjoy soft cheeses—as well as other dairy products—as long as they’re pasteurized. And most cheeses available at your local grocery store will be. “I had some serious food aversions for most of my pregnancy—I could scarcely think about bitter vegetables without gagging, and meat and fish were also nauseating,” says Tamara Duker Freuman, a New York City-based dietician and mom of twins. “Thankfully, I started craving dairy products, which, coincidentally, are rich in both protein and calcium. I’d like to think this made a big difference in my pregnancy, since despite all the foods I avoided, I took my pregnancy full term and gave birth to 11.5 total pounds of babies!”

You’ve probably heard horror stories about a masseuse rubbing the wrong spot on a pregnant woman and sending her into early labor. While there are certain pressure points on the ankles and wrists that can gently stimulate pelvic muscles, including the uterus, a trained prenatal message therapist will know to avoid those areas. “If going into labor was as easy as rubbing your feet,” says Mallon, “then we wouldn’t need to be inducing women all the time.”

In fact, studies have shown that massage therapy during pregnancy can reduce anxiety, decrease symptoms of depression, relieve muscle aches and joint pains, and improve labor outcomes and newborn health. So go ahead, book that massage (or 10!). After all, it’s good for you.

Plus, More from The Bump :

Healthy Ways to Feed Your Cravings