"It was just so amazing to have it go as spontaneous but as well as it did... it was just pure magic."
ByNehal Aggarwal
Associate Editor
PublishedNov 2019 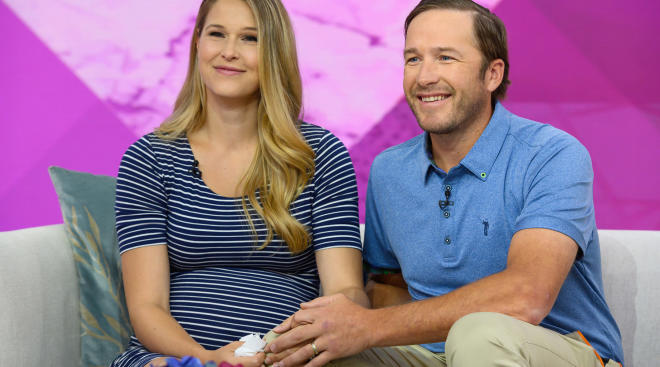 Sometimes, no matter how much you plan and prepare, the birth doesn’t go quite as planned. Olympic skier Bode Miller and his wife, Morgan, experienced this firsthand last week when they welcomed twin boys in the most spontaneous, but sweetest way.

The couple had planned on having a home birth, but their midwives never made it on it time for the arrival of the twins. According to Bode, his wife thought she had more time and had asked them to come over later. When he found out, he asked them to come over anyway—but by the time they got there, Bode and his mom was holding his sons in their arms.

“Luckily my mom was a midwife, but she hadn’t delivered babies in 20-plus years, and she never delivered twins. We were both pretty relaxed and pretty casual, but we were certainly not qualified to be doing an unassisted home delivery of twins!” he told TODAY Parents.

“We’re still floating from the whole experience,” Morgan also told TODAY. “It was just so amazing to have it go as spontaneous but as well as it did… it was just pure magic.”

The twins arrive a little over a year after the couple lost their one-year-old daughter Emmy in a drowning accident. Their now one-year-old son, Easton, was born four months after her death in 2018. It was an experience Morgan described as the “most confusing of her life” in an Instagram post back in August, where she also announced she and Bode were expectant once again and due in November.

“It felt like by loving my son, I was trying to replace her. The fear of birthing my son and what that meant…proof that time continued without her when all I wanted was for time to stop. But let me say this…I couldn’t have been more wrong,” she wrote in the caption of the post. “Easton provided us an even closer bond to his sister. The moment I heard his cry, something sparked back [life] in my soul…Now, I can actually say with joy and excitement that we are expecting identical twin boys. From the day I met my husband, he has always said he wanted identical twin boys born on his birthday. We are due on the lucky day/angel number of 11/11 which is not far off from Bode’s Birthday of 10/12. From the beginning of this pregnancy, we knew Emmy had her hands in this miracle somehow.”

Since the accident, the couple has been raising awareness surrounding water safety for infants and toddlers. They also put Easton in infant swimming lessons earlier this year.

“We carry Emmy with us every day,” Morgan told TODAY Parents. “Every day is a choice on how we want to continue forward and make sure that our kids are getting the best of us, of life,” Morgan said. “Not to say it’s easy—it’s a battle every day to get up out of bed. To see them and to see the joy in their eyes, and to live vicariously through all of their daily experiences makes each day just a little bit easier.”