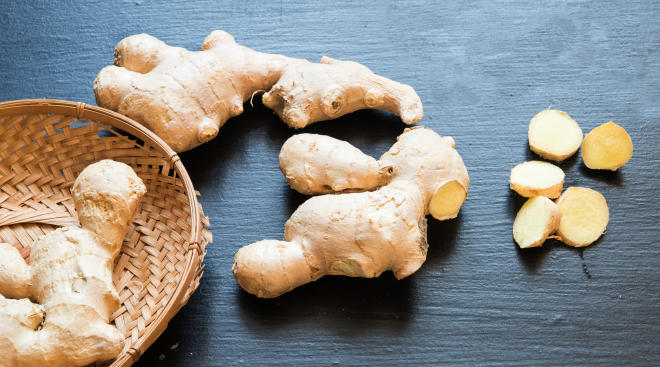 When you’re pregnant, comfort food is totally fair game—it’s just that the foods that’ll bring you comfort may not be mashed potatoes, tomato soup and mac and cheese (or maybe they do, and more power to you!). Pregnancy comes with its fair share of unpleasant side effects, but thankfully there are things you can eat to keep discomfort at bay. We’ve rounded up some common (and annoying) pregnancy symptoms and the foods that can help you feel better.

Check out our chart for foods to ease your symptoms:

What to eat: Ginger
When you’re feeling queasy, ginger’s your best friend. Brew ginger tea, chew candied ginger, snack on ginger snaps or sip ginger ale. Hint: Stirring the soda to get the bubbles out makes it easier on the stomach, says Suzanne Merrill-Nach, MD, a fellow at the American Congress Of Obstetricians And Gynecologists. Don’t like the taste of ginger? It’s also available in capsule form (if you can stomach the idea of swallowing something whole).

What else you can do
Let your aversions be your guide. You might naturally want to avoid strong smells and spicy foods. You can also experiment with the temperature of your food, suggests Melinda Johnson, RD, director of the Didactic Program In Dietetics at Arizona State University and spokeswoman for the Academy Of Nutrition And Dietetics. You may get relief from eating cold foods like gelatin or a smoothie (yum). Other options that can be stomach settlers include raw veggies, cold sandwiches, lemon slices and, of course, crackers.

Know that nausea is more likely to happen on an empty stomach—hence the name morning sickness, since that’s when you’re likely the hungriest. If you tend to feel nauseous when you wake up, keep crackers by your bed to nibble on right away.

Also, eat sparingly but often. Consuming frequent, small meals is easier on your stomach than having three large ones a day. And don’t worry too much: Whatever you can tolerate is the right thing to eat. “If you’re throwing up, it doesn’t matter if it’s not the perfectly well-balanced diet,” says Merrill-Nach.

What to eat: Beans
Beans, berries and broccoli will boost your fiber intake to keep things running smoothly. High-fiber breakfast cereals and oatmeal are also easy ways to ease this common pregnancy symptom. (Sorry about this one.)

What else you can do
Keep a bottle of water with you and drink from it as much as you can. Hydration is important to keep your digestive system moving. Also, Merrill-Nach says, the calcium in prenatal vitamins can, um, stop you up. Ask your OB to recommend a vitamin that contains a stool softener, which could get things going again.

What to eat: Bananas
In general, acidic foods bring on the burn, making low-acidic fruit, such as bananas and melons, a good choice to lessen heartburn symptoms. Avoiding acidic foods can help, but in pregnancy, it’s not so much about trigger foods. In other words, you might sometimes be able to say that the chili you ate at lunch caused your heartburn, but in general, you can just chalk it up to being pregnant.

What else you can do
Pay attention to what you eat and when you eat it. You might want to skip spicy foods and not nosh too close to bedtime, which can cause heartburn. Also, don’t lie down for at least an hour or so after eating a meal. If you do, Johnson recommends using lots of pillows to prop yourself up in a comfortable position and keep an antacid on your nightstand.

What to eat: Spinach
It’s common to become iron-deficient or anemic in pregnancy, making you even more tired (if that’s possible). If you’ve had pregnancies close together or if you follow a vegetarian diet, you can probably count yourself among that group, says Merrill-Nach. Vegetarians tend to have lower levels of vitamin B-12 and iron. Adding more iron-rich foods may help boost energy. That includes red meats, beans, leafy green vegetables like spinach and fortified breakfast cereals. Ask your doctor if you should also be taking an iron supplement.

What else you can do
You might not realize it, but staying hydrated is key to keeping your energy level up. “When you’re dehydrated, your blood becomes a bit sluggish moving through your body, making you sluggish too,” explains Johnson. Besides sipping water, you can eat soup, fruits and veggies to increase your fluid intake. But remember, you’re pregnant: Feeling tired is a given in the first trimester, no matter what you do. Rest as much as you can for now. And know that in the second trimester, you’ll get back some of your energy.

What to drink: Warm milk
A cup of decaffeinated tea or warm milk (plain or flavored) before bed helps some moms-to-be drift off to dreamland, says Johnson. But skip the hot cocoa if you’re sensitive to caffeine—it has a small amount of it, so you’re better off sipping just plain milk.

In general, caffeine should be limited in pregnancy to less than 200 milligrams (about the amount in a 12-ounce cup of coffee) per day. And avoiding it may help you get the ZZZ’s you need. If you can’t kick your caffeinated-coffee or -tea habit completely, try not to drink it late in the day when it’s more likely to interfere with sleep.

What else you can do
Supporting yourself with extra pillows at night can make you more comfortable and help you snooze better. You can use a big pregnancy body pillow or place a cushion between your knees to alleviate any back pain that may be keeping you up.

Experts: Suzanne Merrill-Nach, MD, fellow at the American Congress Of Obstetricians And Gynecologists and private practice ob-gyn in San Diego; Melinda Johnson, RD, Director of the Didactic Program In Dietetics at Arizona State University and spokeswoman for the Academy Of Nutrition And Dietetics

10 Pregnancy Foods to Eat for Baby

Pregnancy Diet: What to Eat When You’re Pregnant

Why You Might Be Having Chest Pain During Pregnancy (and What to Do)
Article saved.Go to My Saved Articles
Article removed.