7 Crazy (but Common) Pregnancy Symptoms I Never Expected to Have

“When the at-home test confirmed I had a teeny, tiny person growing inside of me, I thought I knew exactly what I was in for. I couldn’t have been more wrong.” 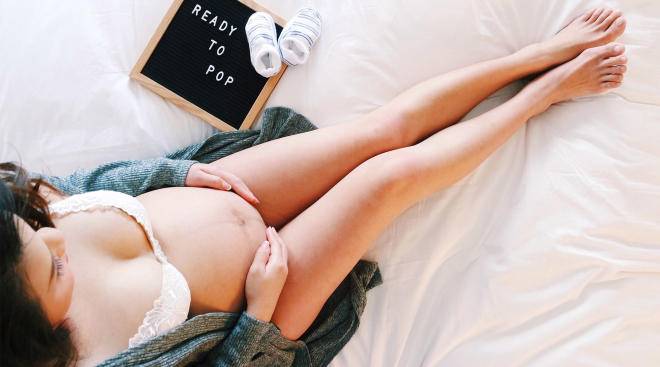 As someone who finds comfort in having way more information than necessary in all situations, I’d read plenty about common pregnancy symptoms before my husband and I even started trying for a baby. So when the at-home test eventually confirmed that I had a teeny, tiny person growing inside of me, I thought I knew exactly what I was in for. I couldn’t have been more wrong.

Many of those classic symptoms did come, just as expected. The thought of eating anything other than crackers was sickening during the first trimester. By the third, even walking two blocks to the grocery store was a major feat. And my moods? To give you some kind of idea, I’ll have you know I started crying one morning when I found out my husband had eaten the last slice of cheese.

Still, those things were just the beginning. It turns out, being pregnant can do all kinds of wholly unexpected things to your body. But even though they might seem totally crazy or even a little scary, many aren’t actually something to worry about—something my doctor reassured me of during several frantic after-hour calls. Here’s what topped the list of bizarre (but more or less benign) symptoms I faced during my pregnancy.

1. I Always Had a Weird Metallic Taste in My Mouth

No joke, I felt like I was sucking on a bunch of copper pennies for almost my entire pregnancy. The metallic taste was weird and gross, and I always worried it was making my breath smell terrible. The unpleasantness only ever went away while I was eating, which basically just gave me one more reason to indulge in whatever delicious snack I wanted at any hour of the day (or night).

2. Insane Heartburn Was a Nightly Thing

It didn’t matter what time I had dinner, or how much I ate, or whether the food was acidic, spicy or bland. I’d go to bed feeling fine—only to wake up a few hours later with fiery reflux. Luckily, popping two Tums gave me near-immediate relief. I considered keeping the bottle right on my nightstand instead of in the medicine cabinet, but since I was getting up to pee every hour anyway, it wasn’t really necessary.

Having a due date in early August, I figured my last trimester would be a little toasty. But I’d break a sweat just lying in bed. In my underwear. In an air-conditioned room. When I came home one July night, my husband blurted out that I looked like I had just run a marathon. In reality, I had walked only six blocks from the train station.

This was before going into labor, mind you. In the weeks leading up to my due date I’d get these sudden, shooting, gasp-inducing pains in my crotch. They’d come out of nowhere and they were so intense, it seemed like there was no way the baby wouldn’t not just fall out right then and there. But he didn’t. (Getting him out would take a lot more work than that!) Once I started meeting other new moms after I gave birth, I learned lightning crotch is actually a pretty common thing.

5. I Kept Having Diarrhea

You hear a lot of moms-to-be complain about constipation, but I had the opposite problem. My last trimester was, quite literally, a shit storm. At one point I ended up having to go to the hospital to get checked for dehydration, since that can trigger premature labor. (Thankfully, I was fine. But if you’re experiencing diarrhea during your pregnancy, definitely call your healthcare provider so you can have it checked out.) After that scary incident, I spent the rest of the summer chugging Gatorade. Pregnancy really was an extreme sport!

6. I Got a Stress Fracture in My Foot

I knew there was a chance my feet might get bigger during pregnancy, but I definitely didn’t see this one coming. And it legit happened out of nowhere. When I was around seven months pregnant, I was walking down the street when a sharp pain hit the top of my right foot. Stubbornly assuming the problem would just go away, I continued walking on the foot for weeks until it became so excruciating that my husband forced me to see the doctor. The fracture eventually healed with a lot of rest and a very ugly orthopedic boot, but no one could figure out why it happened. My midwife suggested it might just have been the result of the ligaments in my foot loosening (a totally normal pregnancy occurrence) coupled with the added pressure of all the extra weight I was carrying.

7. I Felt Like a Stranger in My Own Body

I figured being pregnant would make me feel a little different, but I couldn’t have predicted just how bizarre the whole physical experience would be. I was still the same person on the inside, but so often, I found myself struggling to do things that normally weren’t a big deal—like walking a mile to the farmer’s market on a hot day, sitting comfortably at my desk or even touching my toes. And I’d be lying if I said it didn’t bum me out.

Friends and family reassured me I’d eventually get back to normal. But in that intense hormonal haze, I really didn’t believe it. They were right though. Of course, I didn’t bounce right back to my old self that sweltering August day my son was born. While some of my pregnancy symptoms did fade away as soon as I gave birth, it took a couple more weeks for my foot to heal—and it was months before my body really made sense to me again. But the fact is, it did happen. And it’ll happen to you too.

Marygrace Taylor is a health and parenting writer, former KIWI magazine editor and mom to Eli. Visit her at marygracetaylor.com.