When Will Others Feel Baby Kick?

Can't wait for your partner to feel when baby busts a move? Find out when it could happen. 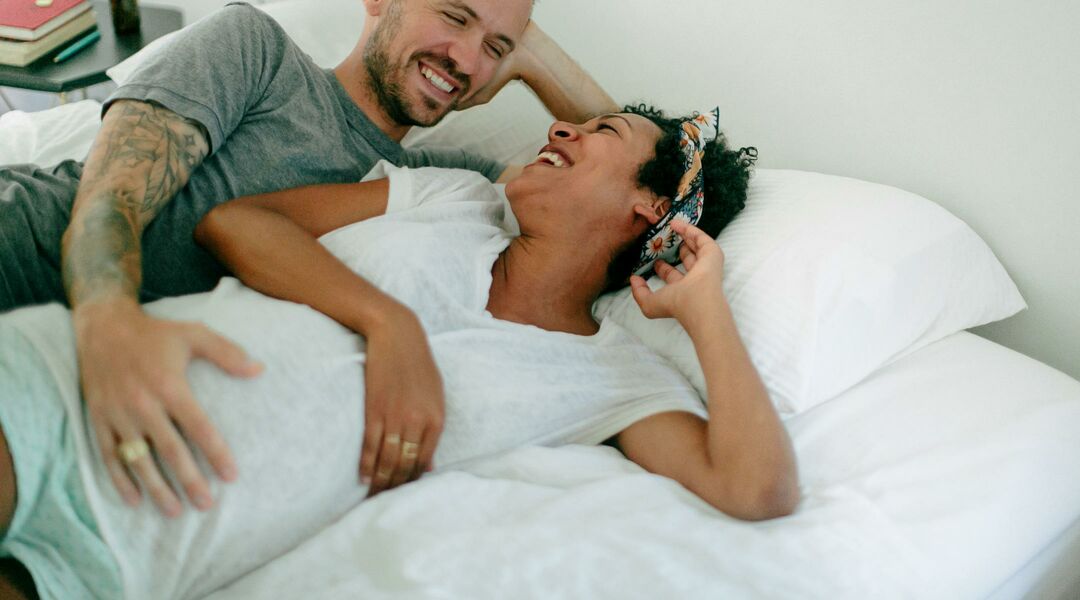 Feeling those first flutters of baby movement is a thrilling milestone for any mom-to-be. Sensing the growing life inside you lets you tune into your pregnancy in a totally new way—so it’s only natural to want to share that experience with your partner. But they’ll likely have to wait a while before they’re able to feel baby kick.

Most women start feeling baby move sometime between 18 and 22 weeks, says Sara Twogood, MD, assistant professor of clinical obstetrics and gynecology at USC Keck School of Medicine in Los Angeles, although some may feel it even earlier in their pregnancy. In the beginning, those early kicks and rolls are super-subtle—in fact, they’re often indistinguishable from stomach gurgles and gas bubbles. “As the baby moves more frequently and women start registering fetal movement as distinct, they’ll often look back and say, ‘that was the baby moving, I just didn’t realize it at the time,’” Twogood says. Of course, when baby’s early activity is tough for even mom to pick up on, movements won’t be noticeable from outside the belly.

That’ll all change as your pregnancy progresses—but exactly when your partner will be able to feel baby move varies greatly from person to person (and pregnancy to pregnancy). For many, it’ll happen sometime between weeks 24 and 28, Twogood says, but that range can be as wide as 20 to 30 weeks. There are several factors that come into play:

• A woman’s weight. It may be harder for someone’s hand on the belly to detect a kicking baby if the mom-to-be is overweight or carries a little extra weight around their midsection, Twogood says, since the movement has to be stronger or more exaggerated to be felt on the outside.

• Position of the baby. Sometimes it’s just a matter of waiting for baby to shift position for others to feel those kicks and jabs. If baby’s facing outward toward your belly, for example, it can be easier to notice those movements than if she’s facing inward toward your back.

Wondering what you can to do to help others feel those somersaults? Keep in mind that babies tend to most active after you’ve eaten a meal and at night, so those are your best times to try. As you feel baby moving, guide the person’s hand to the right spot on your belly—and don’t be afraid to let them softly push down. “It’s safe to apply gentle pressure to the abdomen, which may help people feel the baby more,” Twogood says. “If there’s a question of how much pressure is safe, ask your doctor to demonstrate at your next appointment.”

Want a more personal take on when others can feel baby move? Here, moms share when their partners were able to detect baby’s kicks:

“I would try and try to get my husband to feel the kicks and punches I was feeling for weeks, but every time he would put his hand on my belly the baby would stop. Finally at week 25 he felt a big one!” —Junebug9

“I think around 20 weeks my husband could really feel little jabs coming from my belly.” —Rosebride2006

“He finally felt her at 23 weeks, but he didn’t like to push on my belly and she didn’t always move when he was right there ready to feel. He really could feel her at 24 weeks.” —johnsoar

“Mine was 22 weeks. I didn’t realize what it was until I actually saw my tummy move, like somebody was poking me from the inside out.” —wiglsworth26

“About 23 weeks, because I have an anterior placenta (so it can take a little longer).” —joecubed

“My DH couldn’t feel her until about 27 weeks, although I had been feeling movement since around 17 weeks.” —mrsain1105

“I think around 23 weeks. He could feel little taps on his hand.” —wendyj

“DH felt the baby for the first time right after we got back from our 20 week ultrasound.” —brandie_larue

“I don’t know why, but DH could feel it very early (and me too, when I put my hand on my stomach)—at exactly 16 weeks.” —kmgourley