How to Deal With Bowel Issues During Pregnancy

Having bowel issues? Don't worry, you're not the only one. Find out how why it may be happening and how to treat it.
facebook
twitter
copy link
email
save
ByKorin Miller
Updated February 26, 2020 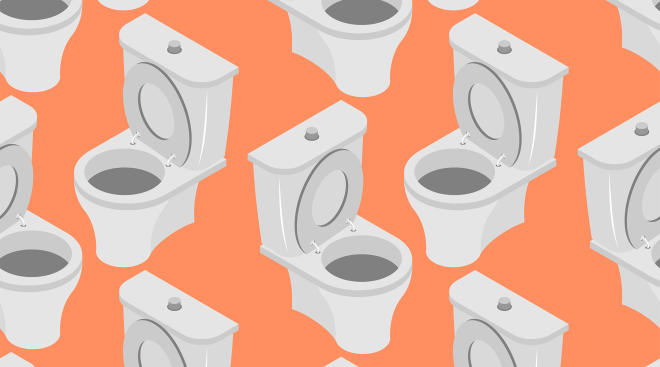 Between hair sprouting in random places, swelling and difficulty finding clothes that fit, pregnancy can be a lesson in humility. To add to it, bowel issues are common among moms-to-be—and by bowel issues, we mean changes with your poop. As a result, you may find yourself dealing with problems like constipation, hemorrhoids or diarrhea. Fun stuff.

Pregnancy has a “major effect” on the way your bowels work and move, says Maia Kayal, MD, an assistant professor of gastroenterology at the Icahn School of Medicine at Mount Sinai in New York City. Among other things, higher-than-usual levels of the hormone progesterone can decrease activity in the smooth muscle in your colon, slowing down the way things work, she says.

Pregnancy hormones can slow down your gut motility, which is the stretching and contractions of the muscles in your gastrointestinal tract, says Madalina Butnariu, MD, director of women’s health in IBD at The Ohio State University Wexner Medical Center. As a result, food doesn’t move through your colon as quickly during pregnancy as it once did.

When food and waste moves slowly through your colon, more water can get sucked out of your stool than usual and create harder stools that are more difficult to pass, says G. Thomas Ruiz, MD, lead ob-gyn at MemorialCare Orange Coast Medical Center in Fountain Valley, California. All of that can lead to constipation, which is defined as having less than three bowel movements in a week.

If you’re not going as often as you’d like, there are a few things you can do on your own. “Try to manipulate your diet to eat more yogurt or drink kefir, or try to eat more fruits,” says Butnariu. Having high fiber foods, like prunes, pears, chia seeds and lentils, and drinking plenty of water can also help, she says.

If at-home remedies don’t do the trick, call your doctor. They may recommend using laxatives like psyllium (Metamucil) or methylcellulose (Citrucel), Kayal says, but check with your doctor before trying them on your own. When it comes to constipation, it’s important to call for help sooner rather than later so your doctor can intervene with less invasive methods, Ruiz says. If you get too stopped up, you may need an enema, he points out.

Pregnancy is more likely to cause you to be constipated rather than having diarrhea, says Ruiz. As a result, having diarrhea in pregnancy is often due to a virus, he says. Maybe you caught a stomach bug or ate something funny. Whatever the cause, “the most important thing is to stay well hydrated,” Ruiz says. Following the BRAT diet—that is, eating mild foods like bananas, rice, applesauce and toast—and getting in plenty of liquids can help, he says.

You’ll definitely want to talk to your doctor before taking medication. Anti-diarrheal drugs like Imodium are considered a Class C drug by the Food and Drug Administration (FDA), which means there aren’t enough studies on its impact on pregnant women and their babies to fully establish its safety.

While it’s not overly common, in certain cases diarrhea during pregnancy can be a sign of an underlying gastrointestinal disorder. “Sometimes conditions like celiac disease or inflammatory bowel disease can present in pregnancy,” says Christine Frissora, MD, a gastroenterologist at NewYork-Presbyterian Hospital and Weill Cornell Medicine in New York City.

In general, diarrhea in pregnancy resolves in a day or two, according to Kayal. But if you’ve had it for longer than a week, you’re having trouble keeping things in and you’re having signs of dehydration like feeling dizzy or not peeing often, Kayal says it’s time to call your doctor.

Hemorrhoids are swollen veins in your anus that are usually caused in pregnancy by pressure from your growing uterus, Kayal says. “Hemorrhoids are common in the last trimester of pregnancy and immediately postpartum,” she adds.

Being constipated can make hemorrhoids worse (thanks to all that pushing), which is why Butnariu recommends drinking plenty of fluids and eating a fiber-rich diet to try to stay regular. If you’ve already developed hemorrhoids, you can get relief at home by taking sitz baths, Frissora says. Over-the-counter treatments like witch hazel pads and creams and ointments like Preparation H or Anusol can also help provide relief, Ruiz says—just talk to your doctor before using any new medication during pregnancy, to be safe.

If your hemorrhoids are painful or you’re seeing blood in your poop, Kayal says you should call your doctor for an evaluation.

Maia Kayal, MD, is an assistant professor of gastroenterology at the Icahn School of Medicine at Mount Sinai and The Susan and Leonard Feinstein Inflammatory Bowel Disease (IBD) Center in New York City. She earned her medical degree from New York University School of Medicine with the highest honors.

Madalina Butnariu, MD, is the director of women’s health in IBD at The Ohio State University Wexner Medical Center. She earned her medical degree from Grigore T. Popa University of Medicine and Pharmacy in 1995.

Christine Frissora, MD, is an associate professor of medicine at The Joan Sanford I. Weill Medical College of Cornell University and an assistant attending physician at NewYork-Presbyterian Hospital Cornell Campus. She earned her medical degree from Cornell University in Manhattan.

How to Stay Hydrated in Pregnancy

Pregnancy Diet: What to Eat When You’re Pregnant