Between her first and second pregnancy, Princess Kate has perfected the art of dressing her bump. Sure, she’s rocked high-end labels (and the queen’s jewels) when the occasion calls for it, but she’s shown herself to be the people’s princess in choosing plenty of stylish looks that don’t break the bank. Here, a look back at eight of her all-time stunning budget-friendly looks. 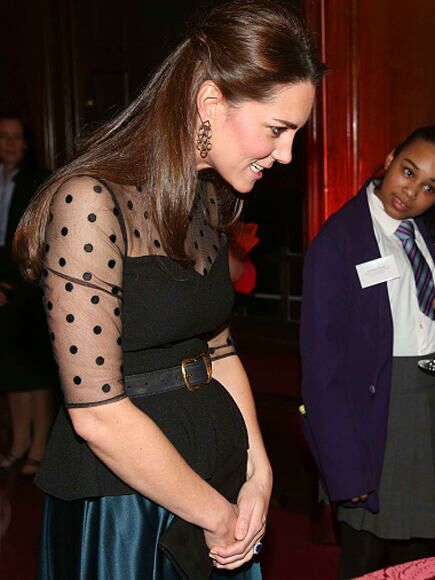 During her first pregnancy, Kate cruised into her second trimester with this gray, long-sleeved, etched dress. A fan of wrap dresses, the princess wore this figure-flattering outfit in February 2013 to an event at the Hope House treatment center in London.

Kate uncharacteristically opted for a flowy frock six months into her pregnancy with George during an April 2013 visit to Warner Bros. Studios. Paired with a cropped black jacket, pumps and a clutch, this look is spot on. Kate fans agreed, flocking to Topshop and buying up the non-maternity dress in a matter of hours.

We’re used to Kate covering up her bump under jacket after amazing jacket. But at the November 2014 Place2Be Wellbeing in Schools Awards held at Kensington Palace, the princess showed off her tiny belly with a belted peplum top by Hobbs that enhanced her growing curves.

Kate attended a Creativity is GREAT event in New York City in December 2014, wearing her version of a classic LBD: a black, turtleneck, empire-waist knit dress from Seraphine, dressed up with a gold statement necklace.

In February, Kate visited the 1851 Trust — a sailing organization for young people — and dressed to match the nautical occasion. She wore a sailboat-print shift dress from the Somerset by Alice Temperley collection. The lesson here: small prints, big impact.

How do you dress when visiting TV royals: the Crawley family of Downton Abbey? Understated and classic, which is exactly how we’d describe this knee-length JoJo Maman Bébé coat that Kate wore during her March trip to the set.

We saw more pattern play from Kate during a visit to London’s Brookhill Children’s Center in March. This black-and-white polka-dot wrap dress hugged the princess’s growing curves in all the right places — at the bosom and waist — but still looked modest and comfy thanks to the loose, feminine skater-style bottom.

The Top Places to Shop for Plus-Size Maternity Clothes

The Best Maternity Bridesmaid Dresses for Every Bridal Party Look Stylish Maternity Wedding Dresses for Every Type of Bride The Best Maternity Leggings to Complete Your Pregnancy Wardrobe 15 Places to Shop for the Best Maternity Clothes