From Angelina to Britney to Posh, seems like everyone's delivering baby via the knife these days. But when is it really appropriate for a doc to draw the scalpel? Read as our experts battle it out, then post your own opinion below.Plus:10 Things No One Tells You About C-SectionsHow to Avoid a C-SectionCreate Your Birth Plan 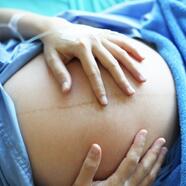 The public debate now is over primary elective cesareans (meaning, the first birth), but this gets confounded with repeat cesareans, which are typically planned in advance. A true ‘elective c-section’ would also presumably be without any medical indication and the mother would have to ask for it before she goes into labor, not when she’s 7 cm dilated and in transition. In our survey, under those conditions, literally one woman out of more than 250 actually asked for a c-section.

But, c-sections are a rising phenomenon — now over 30% of all births. There’s definitely a question of what’s driving this, but I don’t think it’s maternal request.

Moms with medically elective c-sections were more than twice as likely to be rehospitalized as moms who had vaginal birth or unplanned c-section. The leading reasons were complications from surgery and infection. If you do surgery on healthy people, you’re likely to have complications. For many mothers experiencing labor before a cesarean may have benefits. One theory is that it thins the uterus. And, a French study actually found higher rates of maternal mortality for low-risk c-sections. In terms of health outcomes for the mother, c-sections just don’t give benefits.

If it’s much safer for the baby, moms will still do it. So, what’s the outcome for babies? Using national data, we looked at the lowest risk births and neonatal mortality (within the first 28 days), leaning over backwards to be conservative — we took out deaths from congenital abnormalities, cases of respiratory matter and low apgar scores. Controlling for all variables, compared to low-risk vaginal birth, infants were twice as likely to die in the first month after low-risk cesarean birth. This higher death rate went across every possible reason for cause of death — it wasn’t just a matter of it being the same cause every time.

There’s the stimulation that the baby gets during labor, which has a positive effect on the respiratory system and may be associated with lower initial respiratory disease rates. There’s also the danger of iatrogenic prematurity, which is prematurity as a result of age miscalculation and the cesarean being performed too early, resulting in a smaller baby.

Concern about a big baby is not a medical reason for a c-section. We found when comparing a baby’s estimated weight at birth with the actual weight, doctors were much more likely to estimate the baby to be extremely large (over 4,000 grams) than the actual weight. Doctors also tend to underestimate birth weight — in reality, most babies end up in the middle. Roughly 17% of babies were predicted to be extremely large, and only 12% actually turned out to be.

“First, the data we’ve seen doesn’t suggest maternal request cesareans are as big a phenomenon as people think. It makes a good story and an interesting ethical question, but as an actual driver of change, there’s not a lot there. One of the big questions to think about, is, what’s really elective?

What about vaginal trauma?

If women don’t want future incontinence, pelvic floor dysfunction or lax vaginal muscles, they should make a plan to not get old. For the vast majority of women who experience these conditions, age is the driving factor, not a vaginal birth. Of all mothers in our national survey, no matter what type of delivery, 24% reported urinary problems and 29% reported bowel problems in the first two months. However, when broken down by type of delivery, there wasn’t much of a difference. And, after six months, only about one in ten said the problem had persisted. About 50% of women experienced a painful perineum in the first two months after vaginal delivery, but by six months, that number went down to 2%.

In contrast, among the moms who did have c-sections, 78% reported pain at the site of incision in the first two months, and 18% still were experiencing the problem at six months. No one would argue that vaginal birth is painless and without any subsequent health problems, but postpartum recovery from a cesarean is generally much more difficult. It’s a question of pay me now or pay me later.

For mothers to lower their chances of an unnecessary cesarean, the most important thing is to do some exploration on a doctor’s c-section rate before you actually visit. Doctors will typically say their c-sections were based on medical judgment, but the fact is some consistently have much higher cesarean rates than others. A c-section rate of over 30% is not a good sign. Nowadays in the United States, anything under 20% suggests that someone will think carefully before doing a cesarean.

The difference between emergency (after there’s been some amount of labor) and elective c-sections? There’s two sides of this. Psychologically, I can see why it’s difficult to have a c-section and still have dealt with labor. But physiologically, short of a real emergency, there may be some benefits to experiencing some labor.

There’s so much emphasis on the pain of labor , but this needs to be put against the likelihood of long term problems with cesarean. I’ve heard so many quotes from moms, saying if they knew they’d be in pain for this long after a cesarean, they’d have gone through labor. Everyone’s seen TV shows with mothers screaming through labor, but long term postpartum pain after a c-section is more real for mothers. I’d never say there’ll be no pain with vaginal delivery, but the tradeoff of short term for long term pain seems reasonable for mothers and strongly reduces the need for subsequent cesareans."

In the 1950s, mortality from c-section approached 3 to 4%, so anything vaginally was a win. But things have changed. Anesthesia is much better, and post-op care and surgery techniques have improved. Now, there’s a mortality rate of about zero. Death after c-section is caused more often by underlying conditions like preeclampsia, liver failure or toxioplasty — circumstances where the woman has a chance of dying because she’s really sick, not because the of the c-section itself.

The benefits from c-section are all long term — say, 20 years later, when you don’t need bladder suspension. Sure, the short-term benefits of vaginal delivery look better, with a faster recovery. But you’re making a trade.

And it also depends on the data. You need to separate elective c-sections from those who labor all day and then have a c-section. About 40% of women who have a c-section after a day of labor have infection in their uterus and other areas. If you do an elective c-section, before labor beings, there’s only a 1% rate of complication. Obviously the woman who pushed all day and then underwent a cesarean is not going to have any protection from bladder problems.

C-section benefits include decrease in stress incontinence, leaky urine and stool and uterine prolapse. One in five hysterectomies are done for prolapse or incontinence, and 90% of incontinence can be traced back to vaginal delivery. So, one out of every five hysterectomies could most likely be avoided by elective c-section. You might recover for a time, but as you get older, it will get worse. And expect your bladder and vagina to do the same. Spit a cantaloupe out of your mouth and then try to whistle — obviously, you’re going to do some damage.

50% of women who deliver vaginally will leak urine and/or stool in their lifetime. You can do surgery today (a c-section) that will reduce your likelihood by 90% of needing surgery later.

In looking at delivery of babies 8lb 13oz or more, there’s three times the fetal injury rate and four times more maternal aggravation (big and extended episiotomies, and other trauma).

The question is, how much resilience does a woman’s tissue have? Around the turn of the century, average baby weight was five or six pounds. Today, it’s around eight pounds. The benefits of this are lower infant mortality rates and better nourished babies, but this also makes it harder to deliver, and brings about the episiotomies and tears and then the nerve damage that shows up later. So really, this isn’t such a “natural” thing… at least, natural labor isn’t like it used to be.

“In medical ethics, we emphasize not being parental. I’m not making decisions for my patients; I’m letting them make their own. If women can choose a breast augmentation, which carries a higher complication rate than a cesarean, than why can’t she choose a c-section? It seems illogical not to let women have one, if they want to.

As for fetal health, the results are pretty comparable. Elective c-sections bring a slightly higher rate of TTN (transient tachypnea of the newborn), where the baby doesn’t clear the lung water out as quickly. (As a baby goes through the birth canal, the chest gets compressed and amniotic fluid pushed out, so there’s less fluid to be aspirated back into the lungs.) After a c-section, the baby starts trying to breathe, if that fluid isn’t cleared out there may be problems. About 20% of c-section babies need oxygen for 48 hours or less. But, that’s a short term problem — a two day deal. I don’t consider this a major complication.

In vaginal delivery, there’s three times the fetal injury rate (including broken collar bones, low apgar scores and acidosis). It’s clear that babies are roughed up in the process. And, when c-section babies come out with trouble, it’s important to look at the reason for c-section – if you have a cesarean for a toxemic pregnancy and the baby comes out sick, it’s because of the illness, not the c-section.

My point is, you need to inform women and let them choose. If there’s a family history of stress, incontinence or uterine prolapse, that’s a risk factor. If you have one primary relative with these issues you’re more than twice as likely to also experience problems, and if you have two primary relatives, you’re three times as likely. The second risk factor is the size of your baby — if it’s estimated more than 4,000 grams, there’s a much higher complication rate. With both these of patients, I offer c-sections.

There’s also a huge myth that one can only have three c-sections. Many years ago, when we weren’t as keen on women’s rights, a lot of systems said that if you had three c-sections, you needed to have your tubes tied — not just to protect mom, but to protect taxpayers from the added cost. Yes, risk of complications do increase after the first c-section, but I’ve been doing this for 22 years and I can tell you the complications induced by a previous cesarean are nil — one in 500. Now, if that first c-section came at the end of a long day of labor, that means the tissue is sticking together and it will be more difficult. But if the first c-section is elective, there’s a lower chance of complications in the second.

My c-section rate is about 40%, because I have this discussion and allow patients to choose what they want. In my clear conscience, I have to tell these people, ‘look, you’re taking a risk here.’ That’s the key, to offer the option — not to force it on anyone, but to offer."