Pregnancy can be a real pain in the tailbone. Learn what's causing that discomfort and how to find some relief. 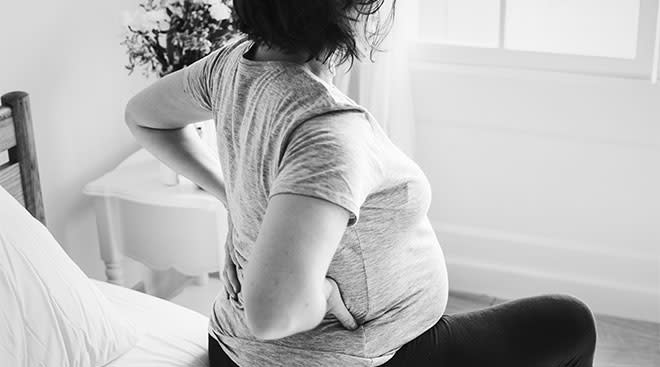 It’s no secret that pregnancy comes with its own unique set of aches and pains. But while you’ve probably heard of things like round ligament pain, tailbone pain during pregnancy doesn’t get a lot of attention.

Still, it can and does happen. Grappling with butt pain during pregnancy? Here are some possible causes, plus what you can do to treat it.

What Causes Tailbone Pain During Pregnancy?

Tailbone pain, aka coccydynia, isn’t overly common in pregnancy, but it’s not rare either. “More than half of pregnant women experience back pain. A smaller amount experience tailbone pain,” says Christine Greves, MD, an ob-gyn at the Winnie Palmer Hospital for Women & Babies in Orlando, Florida.

Still, it happens often enough, says Michael Cackovic, MD, an ob-gyn at the Ohio State University Wexner Medical Center. “I probably hear about it two to three times a day,” he says.

Moms-to-be experience tailbone pain at the bottom of their spine. “I’ve heard some of my patients say it’s a pain in their bottom—literally,” Greves says. The cause of tailbone pain in pregnancy can vary. When you’re expecting, there’s a lot of stress on your axial skeleton (the bones that make up your head, neck and trunk) and your pelvis, and that can lead to pain and joint issues, says Jessica Shepherd, MD, a Texas-based ob-gyn.

There’s also direct pressure on your tailbone from your growing baby. “The tailbone, or coccyx, is immediately behind and below the uterus,” Cackovic says. “In a normal term pregnancy, that means there is about 10 to 12 pounds pushing on it when you account for baby, placenta, uterus and fluids.” Plus, “your tailbone serves as a point of attachment for many tendons and ligaments, all which have nerves that will fire when something presses on them,” he adds. Even seemingly minor things like constipation can make it worse.

One more thing that could be behind your tailbone pain: Relaxin, a hormone secreted by the placenta, can exacerbate tailbone pain. “Relaxin’s role is to relax the ligaments in the pelvis to allow for birth, and it can make the tailbone more sensitive,” Cackovic says.

While tailbone pain usually happens more in the later stages of pregnancy, Cackovic says it can start during any trimester, depending on things like your body size, pelvis type and whether you’ve been pregnant before. Still, he says, “it’s usually worse in the third trimester when the size of the baby and position add the most pressure.”

How to Ease Tailbone Pain During Pregnancy

While you can’t change the factors that cause your tailbone pain during pregnancy, there are a few things you can do to try to get relief.

• Use ice or heat on your tailbone. When the pain rears its head, reach for an ice pack or heating pad—“whichever feels better,” says Julie Lamppa, APRN, CNM, a certified nurse midwife at Mayo Clinic.

• Take an OTC pain reliever. Tylenol, which is thought to be safe to take during pregnancy, is a good option here, Lamppa says.

• Get a special pillow. Using a donut pillow, which is a round pillow with a hole in the center, can help relieve pressure when you sit, Greves says.

When to Call the Doctor About Tailbone Pain

It’s always a good idea to at least mention to your doctor at your next visit when you’re having any kind of pain. But if you’re having daily tailbone pain, it’s preventing you from doing your normal daily activities or it’s excruciating, Shepherd recommends calling your doctor sooner rather than later.

Michael Cackovic, MD, is an ob-gyn specializing in maternal fetal medicine at the Ohio State University Wexner Medical Center in Columbus. He earned his medical degree from Hahnemann University College of Medicine in 1997.

How to Deal with Body Aches During Pregnancy

How Much Does the Uterus Grow During Pregnancy?

Over-the-Counter Medications You Can Safely Take While Pregnant