“It's been chronicling our family's growth and our journey and we're so happy that this video is the next chapter.”
facebook
twitter
copy link
email
save
ByNehal Aggarwal
Associate Editor
Updated August 13, 2020 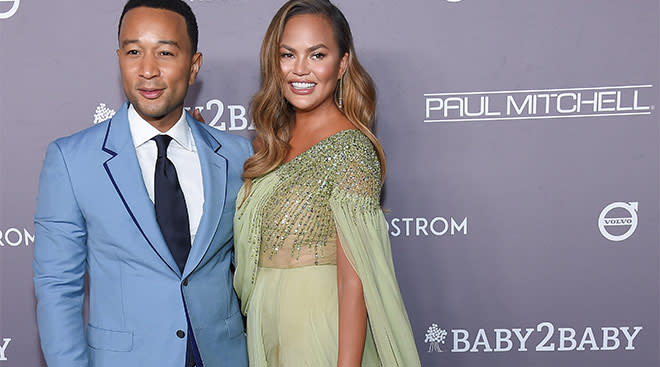 Today, August 13, John Legend released his new video for “Wild,” which features his wife Teigen—and many fans are convinced it was the couple’s way of announcing their third pregnancy.

In the video, viewers can see footage of the couple driving in a convertible, going to the beach and spending time with their two children, daughter Luna, 4, and son Miles, 2. However, right before the video ends, we see a glimpse of what appears to be Teigen’s budding baby bump.

While the couple has yet to outright confirm the news, the 34-year-old cookbook author did reshare, with an emoji, a tweet from Vevo, which read, “John Legend and Chrissy Teigen drive us ‘Wild’ in the heartfelt visuals for John’s latest song with Gary Clark Jr. Be sure to watch it now for a beautiful surprise!"

According to PopSugar, Teigen and Legend also hosted a live stream on YouTube, in which they appeared to hint at the pregnancy, describing the video as their journey together as couple. “It’s been chronicling our family’s growth and our journey and we’re so happy that this video is the next chapter.”

Finally, some good news we can all get behind! Congrats to the couple!

Scarlett Johansson and Colin Jost Have Welcomed Their First Child Together

Lance Bass and His Husband Are Expecting Twins This Fall

Morgan and Bode Miller Reveal the Sex of Their Baby

Actress Jennifer Love Hewitt Is Pregnant With Baby No. 3

Princess Beatrice and Her Husband Are Expecting Their First Child

This Is the Unique Name Princess Eugenie Chose for Her Newborn Son
Article saved.Go to My Saved Articles
Article removed.