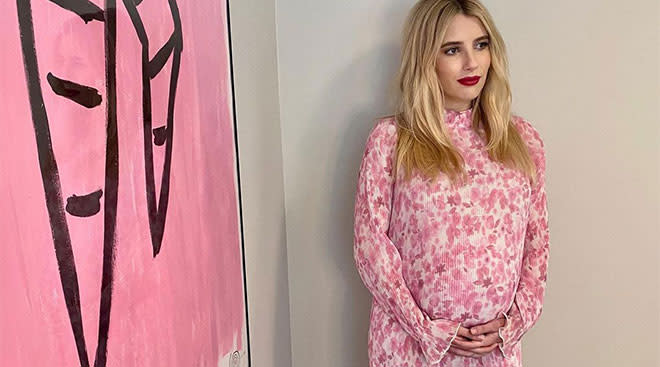 Emma Roberts is expecting her first child, a baby boy, with boyfriend Garrett Hedlund. She announced the pregnancy in August—but apparently her mom broke the news before anyone else could.

In an appearance on Jimmy Kimmel Live! on Monday, October 19, the Scream Queens actress revealed her mom, Kelly Cunningham, accidentally revealed the news before she was ready. “I was keeping my pregnancy pretty low-key, but unfortunately my mother has Instagram. Mothers and Instagram, it’s a bad combination. She spilled the beans,” she told Kimmel.

She continued, “You have to understand about my mom, she doesn’t own a computer and she had a flip phone until about three years ago. For Mother’s Day, I got her an iPhone, because I was like, ‘Now we can FaceTime and iMessage.’ It was such a lovefest, and it was the worst thing I ever did."

According to Roberts, Cunningham’s following soon “grew to a couple thousand, which grew to she had no idea what she was dealing with.” While directly messaging some of Roberts’ fans, Cunningham let it slip that Roberts was in fact pregnant.

"It was a disaster, and I found it all out on a plane so I couldn’t get to her, I couldn’t call her or attack her. I could just iMessage with her and DMed her and ask her to please stop,” Roberts said. “She was like, 'Thank you so much for the well wishes, we are so excited.’ My friends were sending me screengrabs, it was like unbelievable. And then when I said to her, ‘Mom you revealed my pregnancy,’ she goes, ‘Emma, you announced it.’ And I said, ‘No I didn’t, that was a tabloid.’ She was like, ‘Oh, that wasn’t clear.’”

While the actress eventually learned to laugh about the incident, initially it led to a fight in which Roberts blocked her mom on social media. “I blocked her at one point. It was my only weapon," Roberts jokingly said. “She texted me at 2 a.m., ‘Queen, did you block me, question mark, sad face.’ And I said, ‘Yes, I did block you.’ And then I unblocked her. It’s been an Instagram war with my mother that I never saw coming. It’s a good story to tell the baby.”