When it comes to protecting their kids, there’s no stopping these TV mothers.
Save article
ByTanner Stransky
UpdatedMar 2017 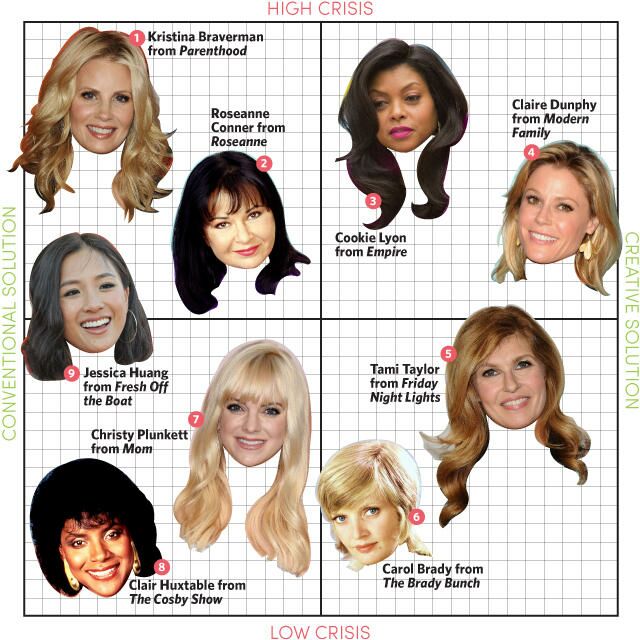 From Clair Huxtable to Claire Dunphy, every TV mom has her own unique parenting style—and it’s never more on display than when a crisis hits. Whether she’s taking on a daughter’s court case or keeping the neighborhood safe from speeding cars, we plotted out our favorite clutch parenting moments on this handy chart.

Worried she may not always be around, Parenthood’s cancer-stricken Kristina Braverman (Monica Potter) teaches son Max (Max Burkholder) some moves to help him get through his school dance.

In a classic Roseanne episode, Roseanne Conner (Roseanne Barr) sticks up for daughter Becky (Alicia Goranson) after she’s accused of flipping the bird in a school photo, saying to the principal and other parents that the gesture was a “political statement.”

Empire’s Cookie Lyon (Taraji P. Henson) pulls son Jamal (Jussie Smollett) out of the trash and lets him know she’s in his corner after dad Lucious (Terrence Howard) brutally rejects him for playing dress up in his mom’s clothes.

After accidentally hitting husband Phil Dunphy (Ty Burrell) with the car, Modern Family’s Claire (Julie Bowen) wants a new stop sign to make the neighborhood safer, even running for city council to fight for it.

Friday Night Lights’s principal Tami Taylor (Connie Britton) relocates funds from the football stadium Jumbotron to the academic department—a brave but unpopular move that benefited all the students (not just hers) in their football-obsessed Texas town.

When her stepsons exclude the girls from their clubhouse, The Brady Bunch’s Carol Brady (Florence Henderson) helps Marcia (Maureen McCormick), Jan (Eve Plumb) and Cindy (Susan Olsen) attempt to build their own hangout.

Mom’s Christy Plunkett (Anna Faris) may be upset that pregnant teenage daughter Violet (Sadie Calvano) is following in her footsteps, but she stands up for her against Violet’s boyfriend’s conservative and unaccepting parents.

After The Cosby Show’s Sondra Huxtable (Sabrina Le Beauf) takes the car repairman who ripped her off to court and her first attorney drops out, mom Clair (Phylicia Rashad) saves the day by taking on—and winning—the case.

Fresh Off the Boat’s Eddie Huang (Hudson Yang) is psyched about going to a Beastie Boys concert—until his friend ditches him at the last minute. Mom Jessica (Constance Wu) agrees to take Eddie so he won’t miss the show