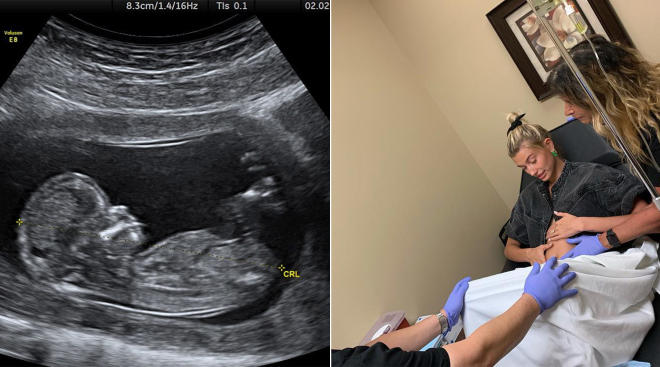 Different year, same prank. Last year, former star of The Bachelor Arie Luyendyk Jr. was at the center of criticism for his April Fools’ Day pregnancy announcement. This time, Justin Bieber is in the hot seat.

Posting a photo of an ultrasound with no caption, fans started speculating the “Baby” crooner and his wife Hailey Baldwin had their own baby on the way.

Of course, others were quick to call out the musician for the timing of his announcement, so Bieber fired back with a photo of Baldwin at the doctor’s with her stomach out, writing “if you thought it was April Fools’.”

Lots of people took the picture as hard proof that the couple really was expecting, and flocked to the photo to congratulate the pair on their baby-to-be. Why would anyone stage such a convincing photo just to pull a prank, right? Not to mention, last week the singer announced via social media that he’d be taking a hiatus from the music scene to focus more on himself and his “deep rooted issues” in order to “sustain my marriage and be the father I want to be.”

And then the 25-year-old broke the news that it really was all one big joke. Disappointed fans were quick to call out the singer for really missing the mark.

“This is very insensitive. Pregnancy is not a joke. Many people suffer from infertility and it destroys them. Way to make a joke of them,” one fan writes.

“Joke about it around your friends if they’re cool with you joking about insensitive [things]. Do you,” one says. “But don’t do it to the public because you’re bound to get backlash. Look at all the angry ‘almost moms-to-be’ in the comments. If I had lost a child or been trying for a child, I’d be upset too.”

An April Fools’ pregnancy announcement is the oldest trick in the book. But while the joke comes and goes for the trickster, the sting lasts a lot longer for those who are struggling to conceive or who are coping with the loss of a baby. About 1 in 8 couples experience some degree of infertility, and the rate of pregnancies that end in miscarriage is estimated at anywhere between 10 and 25 percent. With any luck, the famous couple walked away with one important lesson: Pregnancy is never a joke.