Nothing brings in the likes like a baby on the way. 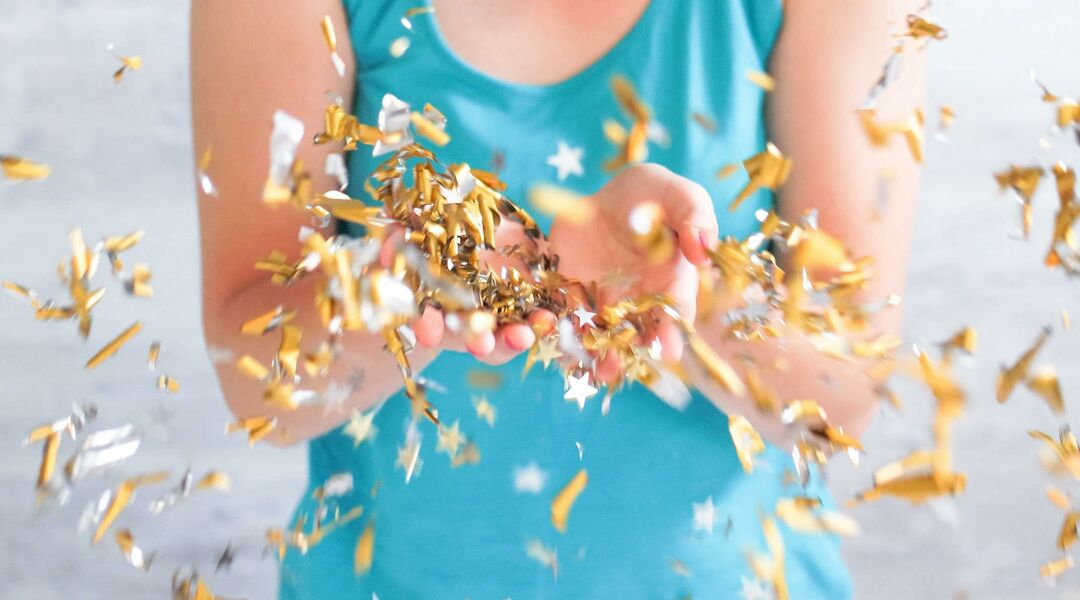 Just when you thought Instagram was safe from imploding, Beyoncé posted a photo to announce the addition to her growing family—with twins. A word of caution: Don’t compare your pregnancy announcement post’s engagement to hers. Both her divinely-staged announcement and newborn shoot earned her a combined 21 million likes—and plenty of spoofs.

A couple that went through two and a half harrowing years of fertility treatments shared the news of their successful attempt with a photo of two onesies surrounded by the 452 injections it took to get there. “I feel like I’ve won the life lottery,” mom-to-be Lauren Walker wrote on Facebook.

A couple undoubtedly surprised all their family and friends when they took to Reddit to cheekily announce their pregnancy. A dirt bike crash in 2014 left Todd Krieg paralyzed from the chest down. Because the couple was told they wouldn’t be able to conceive naturally, they posted a photo sharing their incredible news and the only thing anyone needed to know.

A Utah couple, already the parents of two boys, decided on waiting to announce the arrival of their third because of prior miscarriages. But then keeping the secret just became more entertaining. “Months went on, and I just thought that it would be such a fun surprise,” Katie Pease told Salt Lake City’s KUTV. So when did they choose to have the big reveal? Tannin, Katie’s husband, went on Facebook Live and posted a video while he was at the hospital—a day before the baby was born.

Do You Know Why I Pulled You Over?

Even the best pregnancy announcements don’t typically involve a run in with the law. But a Texas man received the ultimate surprise when a police officer pulled him over and said, “The reason why I stopped you is because you’ve got a child in the car with no child seat." Jarred Wright, the visibly confused driver, was then handed a positive pregnancy test from his wife. Shocked and thrilled, Wright didn’t even have to reach for his license and registration.

When Once Just Isn’t Enough

A young woman whose mother has Alzheimer’s periodically needs to remind her mom that she’s pregnant and when she’s due. And what’s her mother’s reaction? Genuine joy and excitement—which is caught on camera—each and every time.

The Big Bang Theory actress Melissa Rauch chose to announce her pregnancy by writing a personal, touching essay for Glamour magazine. Her piece revealed not only the happy news, but also recounted the difficult journey she had after suffering a miscarriage and all the mixed emotions that came with it.

“Here is the only statement regarding my pregnancy that doesn’t make me feel like a complete fraud: ‘Melissa is expecting her first child. She is extremely overjoyed, but if she’s being honest, due to the fact that she had a miscarriage the last time she was pregnant, she’s pretty much terrified at the moment that it will happen again,’” Rauch wrote.

Her candid words serve as a solemn reminder why sometimes long-awaited pregnancy announcements can be difficult to share. 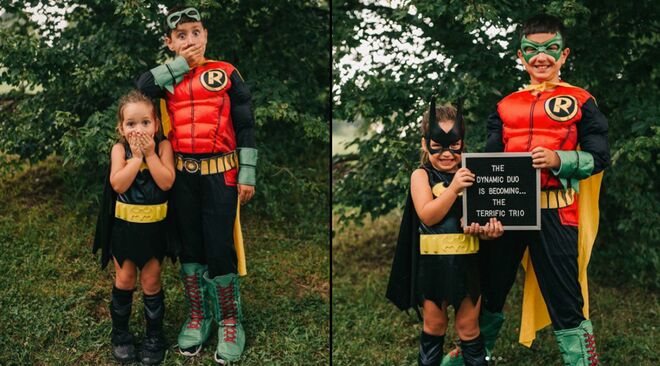 Sidekick on the Way

A little girl’s love of the caped crusader inspired an Indianapolis mom’s amusing photo announcing her third pregnancy. She posted a photo of the kids dressed up in Batman and Robin costumes on Instagram. Their message? “The dynamic duo is becoming… the Terrific Trio.” Holy here we go again, Batman!

A Picture’s Worth a Thousand Words

When Will Morales found out that he and his wife, Chelsie, won a couple’s photo shoot, he was thrilled. He never suspected Chelsie and the photographer, Kara Quinn, had actually orchestrated the whole thing just to get his reaction to Chelsie’s pregnancy reveal on camera. When Chelsie held up a chalkboard that read, “You’re going to be a daddy,” it wasn’t hard for Quinn to get the perfect shot.

Actress Vinessa Shaw took to Instagram to post a photo that playfully referenced her cult classic film, Hocus Pocus, wondering if she should have used that as her pregnancy announcement. Her official announcement a few days earlier was a little more straightforward, as she stood with her husband in front of a Photoshopped backdrop that read “Great news! I am pregnant."

Twice the Surprise, Twice the Joy

Two sisters with the same due date took to Facebook to post a video of their tandem pregnancy announcements. Their mother is clearly excited—to the second degree. Especially since one of the sisters had fertility issues, this best pregnancy announcement was that much more special and unexpected.

After over two years of trying to conceive and a slew of negatives on pregnancy tests, this woman’s video shows how she chose to reveal the (finally) happy news: by using buffalo chicken dip as a decoy. She then presents her husband with an even better treat: Three positive pregnancy tests that have him literally jumping with joy.

Sometimes, the best pregnancy announcements come in the smallest packages. In this video, a little girl shared her mommy’s happy news while contemplating the important job ahead of her—being a big sister.